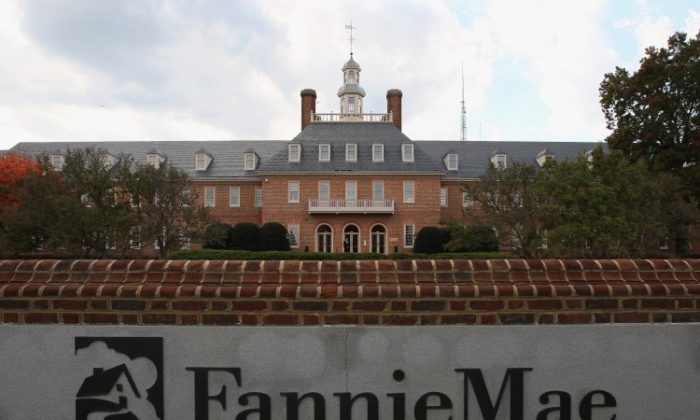 The headquarters of Fannie Mae are seen October 21, 2010 in Washington, DC. (Win McNamee/Getty Images)
US

The Federal Housing Administration (FHA) is deeply insolvent and headed toward a financial crash like that of Freddie Mac and Fannie Mae in 2008, according to analysis from the American Enterprise Institute (AEI) released last week.

“We are watching—in not-so-slow motion—the same gradual descent into insolvency that occurred with Fannie and Freddie a little more than three years ago,” reads the outlook for FHA authored by Edward Pinto, an executive vice president and chief credit officer for Fannie Mae until the late 1980s, and Peter J. Wallison, a general counsel of the U.S. Treasury Department during the Reagan administration.

If you have tried to buy a home in recent years, you know that 20 percent is typically the required amount for a down payment on a mortgage. The only way to get around that is an FHA-backed loan, which requires as little as 3.5 percent down.

The jump from 20 percent to 3.5 percent may seem like a boon to homebuyers, but it is also telling of a system warped by government intrusion.

The FHA was set up during the Great Depression with the noble sounding goal of offering low-income Americans the chance to own a home, but today has morphed into something else entirely. With the powerful National Association of Realtors lobbying behind it, the FHA now offers loans up to $729,750—obviously much higher than the price of a regular low-income family’s home.

“It is laughable to suggest that a $729,750 mortgage is a loan to one of the low-income buyers that the FHA was mandated to help,” according to the outlook.

The FHA itself appears to have dropped all pretenses about being a do-gooder for low-income Americans, simply referring to itself on its website as a mortgage insurance provider. Its self-described history only goes as far back as the 1970s when talking about helping low-income Americans.

Today, the FHA is essentially competing with private companies but operating with a different set of rules afforded by its public status. Where private mortgage insurance providers might get busted by a public regulator for bad accounting, the FHA is immune.

“The FHA can be insolvent today—unable to cover even its expected losses on current delinquent loans—yet still show a positive capital account,” says the outlook, which compares this to the bad accounting that led to the notorious bankruptcy of Enron in 2001.

“This practice bears a remarkable resemblance to Enron’s infamous use of assumptions about the future to bring fictitious future profits into the current year’s earnings.”

The FHA did not respond to a request for comment as of press time.

Some point out that the AEI is a conservative think tank and dismiss its analysis as overblown.

HSH.com, which provides information and news on mortgages, says that the FHA does need changes but that its financial health has gotten better in some ways, not worse. Also, HSH.com points out that the FHA has gotten stricter and implemented new requirements, including increasing the down payment requirement from 3 percent to 3.5 percent.

“Taken together, the changes announced today will protect FHA’s insurance fund from unnecessary and inappropriate risks,” said Commissioner Galante in a press release.

AEI author Pinto said in a phone interview that while the policy changes are needed, two have been widely anticipated by lenders and will therefore have minimal effect going forward. The third is a move to reduce the allowable seller concession from 6 percent to presumably 3 percent, which he said is a necessary and positive move.

“[The new policies] just aren’t going to have much an impact,” said Pinto. “Our analysis applies regardless of FHA’s changes.”

Indeed, FHA moved in November to increase its loan limit from $625,750 to $729,750, which represents a significant move in the opposite direction, toward more risk and financial uncertainty.

Pinto explained that the FHA relies on “very rosy scenarios”—basically always assuming that the future market will be positive—while still operating on a set of accounting rules only possible because its a public agency, not a private one.

“If it were a private firm, regulators would shut it down,” reads his analysis.

Pinto suggested “The FHA should shrink and get back to targeting the group they should be helping: low-income Americans. Further, it needs to stop lending to people who cannot afford to repay their loans.”