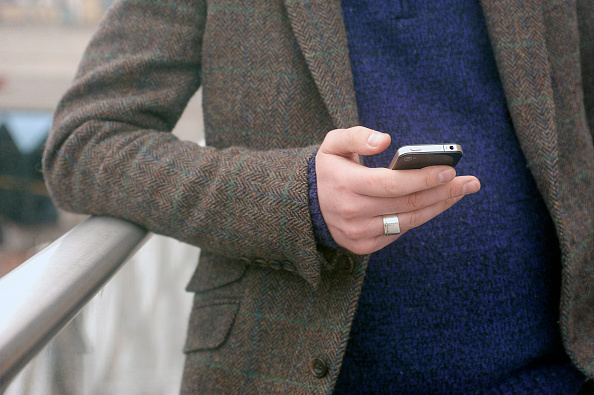 The arm & hand of a Caucasian man wearing a purple jumper and tweed jacket, is seen from the front as he leans against a railing while texting on his smartphone. (Getty Image)
US

Federal law enforcement agencies are ill-equipped to handle allegations of their employees sending inappropriate and sexually explicit texts, emails, and images to each other, according to a new report by the inspector general for the Department of Justice.

The report released Thursday was an evaluation of how the FBI, US Marshals, Drug Enforcement Administration (DEA), and Bureau of Alcohol, Tobacco, Firearms and Explosives (ATF) handled sexual misconduct and harassment allegations that employees have filed between fiscal year 2009 to 2012.

The inspector general found that “sexting”—as the practice of sending sexually explicit text messages is often called—was the second most commonly alleged offense among all four agencies, at 86 cases (14 percent of total).

The top allegation was inappropriate relationships between supervisors and subordinates or among colleagues, at 120 cases, or 19 percent.

Despite the high number of complaints, the four agencies did not have a system to adequately monitor and track employees’ messages sent on government-issued devices, thus hindering their ability to investigate those allegations.

At the FBI, employees’ text messages are proactively monitored, but the agency relies on third-party sources to get the data, according to the report. Sometimes the data is incomplete or corrupted.

The US Marshals Services keeps archives of messages sent and received by employees, but does not proactively monitor them for inappropriate content. By contrast, the DEA and ATF both lacked the technology to archive employees’ messages. All three did not have systems in place to flag texts or images that are sexually explicit.

When investigators were looking into misconduct complaints at the DEA and ATF, they had to ask the involved employees to give up the evidence themselves. “This is problematic because the employees providing the evidence may adulterate it or not provide complete evidence to the investigators,” the report stated.

In the over 100-page report, the inspector general also detailed allegations of agency employees soliciting prostitutes while on overseas missions, including at “sex parties” funded by local drug cartels. Supervisors also failed to report such misconduct through the chain of command to the agency headquarters in about 10 percent of instances.

The report did not make conclusive statements about whether the allegations were true. But it noted that such conduct breached agency guidelines, because sensitive information could have been accessed by the prostitutes when they were in close proximity to employees’ government-issued laptops, devices, and equipment.