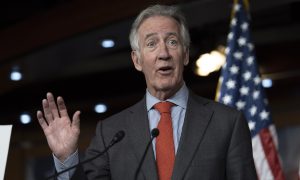 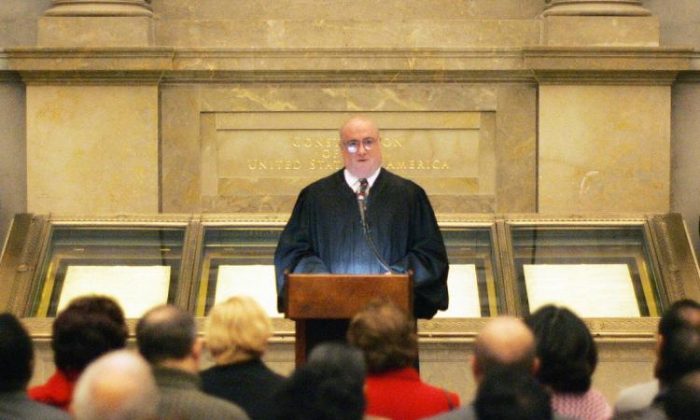 The Honorable Royce C. Lamberth(C), acting Chief Judge of the United States District Court for the District of Columbia, makes remarks after giving the Oath of Allegiance to new U.S. citizens from 28 countries during a Naturalization Ceremony in the Rotunda of the U.S. Constitution at the National Archives in Washington Dec. 15, 2005. Thirty five new Americans from 28 countries took the oath of citizenship. (Tim Sloan/AFP via Getty Images)
Politics

WASHINGTON—U.S. District Court Judge Royce Lamberth upbraided government attorneys in the Hillary Clinton email case, warning them that “there is no FOIA exemption for political expedience, nor is there one for bureaucratic incompetence.”

Lamberth’s comment came in his Aug. 22 decision approving Judicial Watch’s request for expanded discovery in the nonprofit’s lawsuit related to former Secretary of State Hillary Clinton’s use of a private email system to conduct official business, and efforts by her, senior aides on her staff, and other federal officials to conceal the system.

Judicial Watch released the transcript of Lamberth’s decision on Sept. 6. Lamberth, who was appointed by President Ronald Reagan in 1987, has presided over numerous important cases involving the Freedom of Information Act (FOIA).

The existence of the non-secured private Clinton email system became known due to Judicial Watch’s Sept. 10, 2014, FOIA lawsuit seeking emails to and from her and her key aides.

When details of the private Clinton email system became known, it turned out that there were more than 55,000 messages to and from her and her aides, and that her attorneys had deleted more than 30,000 they deemed to be about personal matters, not official duties.

Dozens of classified documents were transmitted over the system, which FBI investigators said could have been compromised by foreign interests.

Then-FBI Director James Comey criticized Clinton in an unprecedented July 2016 national statement, but said he wouldn’t recommend prosecuting her because she didn’t “intend” to break the law.

In his latest decision, Lamberth criticized government lawyers for claiming there was no justification for “re-opening” the discovery he approved in December 2018, including Judicial Watch depositions of Clinton, her former chief of staff Cheryl Mills, and a host of other aides and present and former federal officials.

Most of those depositions have since been completed, but Clinton and Mills have opposed the process. Lamberth gave them 30 days to explain why they think they shouldn’t be deposed.

“First, let me clarify the government’s misunderstanding,” Lamberth told the court. “We’re not reopening discovery here. Discovery never closed. Back in January, I said, ‘The government will—the court will hold a post-discovery hearing to ascertain the adequacy of State’s searches; to determine if Judicial Watch needs to depose additional witnesses, including Hillary Clinton or her former Chief of Staff Cheryl Mills; and to schedule dispositive motions.’ So June 19th was a checkpoint, not a finish line.

“Now, we know more, but we have even more questions than answers. So I won’t hold it against Judicial Watch for expanding their initial discovery request now.”

Lamberth reminded those present that government lawyers tried “in late 2014 and early 2015” to settle the Judicial Watch litigation without telling the court or the nonprofit critically important and relevant information about the Clinton emails.

The judge then pointed to numerous grounds for continuing and expanding Judicial Watch’s discovery and depositions:

Those regularly attending the Wednesday meetings included Clinton’s successor, former Sen. John Kerry (D-Mass.), his chief of staff and deputy chief of staff, and other senior department executives, including Patrick Kennedy, who continued in the under secretary for management position he held under Clinton.

“It is beyond disturbing that the State and Justice departments would continue to try to protect Hillary Clinton and cover up her email scandal,” Judicial Watch President Tom Fitton said in a statement accompanying the release of the Aug. 22 transcript.