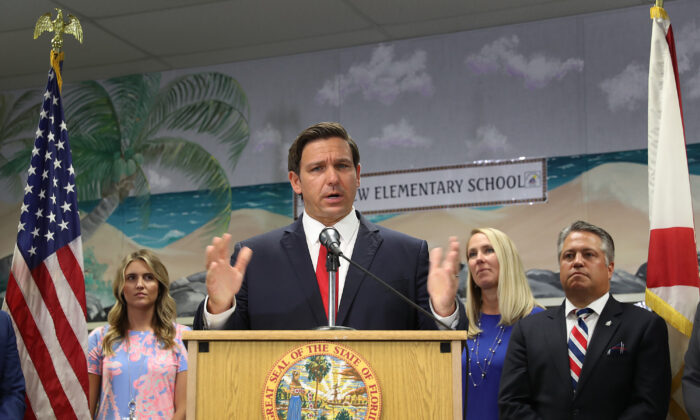 Florida Gov. Ron DeSantis announces that he wants to raise the minimum starting salary for teachers during a press conference held at Bayview Elementary School on Oct. 07, 2019 in Fort Lauderdale, Fla. (Joe Raedle/Getty Images)
US News

It seems likely that the losing parties, including the city of South Miami and several immigrant advocacy groups, will appeal the ruling to a higher court, but as of press time, it was unclear if they had yet done so.

The law, which prevents local governments from enacting policies that prohibit or impede law enforcement from cooperating with federal immigration authorities, allows elected officials to be stripped of their offices if they violate the law.

As a result of the law, law enforcement officers in all 67 Florida counties will have to enter into formal enforcement agreements with ICE in which the federal agency will pay local governments $50 for the extension of an illegal alien’s detention.

The new law goes against a national trend in which left-leaning state and local governments in so-called sanctuary jurisdictions have enacted policies requiring police not to cooperate with ICE. California law even prescribes punishments in some cases for those who cooperate with ICE. Jailers in some jurisdictions have been releasing illegal aliens despite receiving detainer requests from ICE that ask for the individual to be held longer to facilitate deportation proceedings.

President Donald Trump, whose signature issue on the campaign trail in 2016 was immigration, has urged that federal funding be cut off to sanctuary jurisdictions, but Congress hasn’t acceded to this.

As of 2016, the Sunshine State was home to 775,000 illegal aliens, according to Pew Research Center.

The state is also home to 15 municipalities that are sanctuary cities, according to Floridians for Immigration Enforcement, which prefers to label those jurisdictions “anarchy cities.”

Before the law was approved by state legislators, the American Civil Liberties Union (ACLU) began warning “immigrants” in general against visiting Florida, even though legal immigrants wouldn’t be affected by the law.

An “alert was issued to caution both Florida travelers and residents, especially Black, brown & Latinx communities, of the increased likelihood of racial and ethnic profiling, unjust detention, and possible deportation if these anti-immigrant bills pass,” the ACLU stated.

The law, signed in June by Florida Gov. Ron DeSantis, a Republican, mandates that police have to keep already detained illegal aliens in custody an extra 48 hours until ICE can transport them to a federal immigration detention facility.

DeSantis championed the bill, known as SB 168. In April, it passed the House 69–47 and the Senate 22–18. When he signed it into law earlier this year, the governor said, “This is about public safety, not about politics. We must do everything within our power, and use all the tools available to us, to ensure that our communities are safe.”

“Congress gave a clear indication that it sought to facilitate, not preempt, the type of cooperation that SB 168 mandates.”

Bloom struck down part of the law. The judge invalidated a provision requiring Florida law enforcement officials to transport illegal aliens across state lines if asked to do so by ICE.

Making local police function as federal immigration enforcement officials undermines any trust the police have established within the immigrant community, the lawsuit stated.

“Racial and national origin minorities who are victims of domestic violence, sexual assault, and human trafficking will be deterred from accessing services for crime, placing them at greater risk and undermining public safety.”