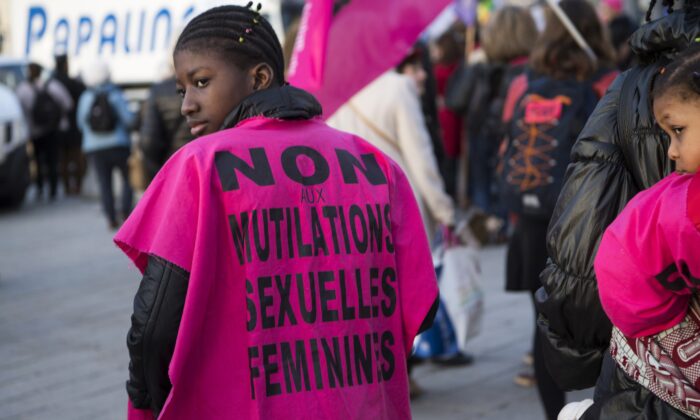 A woman wears a jersey reading "No to female genital mutilation" during a demonstration to defend women's rights on International Women's Day in Marseille, France, on March 8, 2018. (Bertrand Langlois/AFP via Getty Images)
Judiciary

A federal judge has tossed charges against a Michigan physician who had been accused of performing female genital mutilation (FGM) on young girls, and accused the prosecutors of vindictively pursuing new charges after he previously struck down as unconstitutional an earlier version of the federal anti-FGM law.

FGM is “a procedure performed on a woman or girl to alter or injure her genitalia for non-medical reasons” and “most often involves the partial or total removal of her external genitalia,” according to UNICEF.

In some countries where the practice persists, “it is seen as a rite of passage into womanhood, while others see it as a way to suppress a woman’s sexuality.” The practice, widely condemned in the Western world, is associated with Islam even though that belief system is said not to require it and it is carried out in some non-Muslim countries.

Some communities in the Middle East, Africa, and Asia practice FGM on the theory it will ensure a girl’s marriageability or family honor.

When this case came before him in November 2018, U.S. District Judge Bernard Friedman struck down the old 1996 federal law that banned FGM, finding that states, not Congress, had the power to regulate the practice, which doesn’t fall under the Constitution’s commerce clause because it isn’t a commercial activity.

Congress responded by passing a new law, the Stop FGM Act of 2020, which then-President Donald Trump signed into law on Jan. 5. The statute describes FGM as “a form of child abuse, gender discrimination and violence against women and girls,” and a “global problem whose eradication requires international cooperation and enforcement at the national level.”

The new law gives federal law enforcement the authority to go after perpetrators of FGM, doubles the punishment to 10 years’ imprisonment, and requires government agencies to track the practice and report what they do to curtail it.

In the case at hand, prosecutors filed a series of superseding indictments, the most recent indictment coming in February of this year, but the charges weren’t brought under the new anti-FGM law.

Originally, prosecutors claimed that mothers from Michigan, Minnesota, and Illinois brought their 7-year-old girls to Dr. Jumana Nagarwala for the operation. Nagarwala and the other defendants denied they committed any crime. Nagarwala maintained she was carrying out an innocent religious custom on girls from her India-based Muslim sect.

In the fourth superseding indictment filed by the government in February, Nagarwala, another medical doctor and his wife, and a mother of one of the alleged victims were charged with different offenses. The federal charges included “Conspiracy to Make False Statements,” “False Statements,” “Conspiracy to Tamper with a Witness,” and “Tampering with a Witness,” according to court documents.

The defendants’ lawyers argued in May that the government “manipulated the charges” in an effort to “win this case at all costs.”

“The government did not just go back for a second bite at the apple—it is working its way through the entire orchard,” they said at the time.

But on Sept. 28, Friedman, a Reagan appointee, dismissed the charges remaining in the 4-year-old prosecutorial effort against Nagarwala and the three others.

“The government obtained the fourth superseding indictment, which asserts new and additional charges, in retaliation for defendants’ past success in having other charges dismissed,” Friedman wrote in his order, a copy of which was obtained by The Epoch Times.

“Such vindictive or retaliatory prosecution is a due process violation of the most basic sort.”

Acting U.S. Attorney for the Eastern District of Michigan Saima Mohsin was unhappy about the ruling.

“We are very disappointed in the Court’s decision today dismissing the indictment,” she said in a statement on Sept. 28.

“We take our duty to protect children very seriously. Congress sought to protect young girls from the cruelty of the practice of female genital mutilation when it enacted 18 U.S.C. § 116 in 1996. Congress reaffirmed the importance of this law when it reenacted the statute in 2020 after the Court’s dismissal of the charge in this case as unconstitutional.

“Child victims are vulnerable and they deserve our best efforts to hold accountable those who harm them.”

The Ayaan Hirsi Ali Foundation responded with “shock, dismay, and heartbreak for the girls that may never see justice.”

There needs to be “Anger, motivation, and a renewed drive to abolish FGM in America. We lost the battle but are fighting to win the war,” tweeted the foundation, founded by an ex-Muslim who had FGM performed on her in her native Somalia.