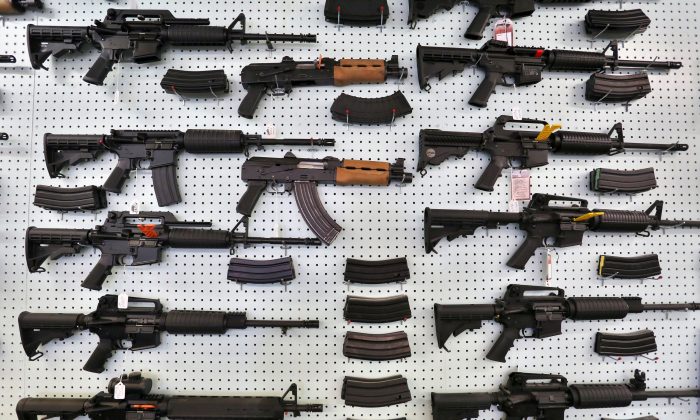 A federal judge has issued a temporary restraining order (TRO) against a county-level ordinance in Colorado that bans the manufacture, sale, and transfer of several types of semiautomatic rifles and handguns, which gun rights groups say violates the Second Amendment protection of the right to keep and bear arms.

The Boulder County Board of Commissioners adopted Ordinance 2022-5 (pdf) on Aug. 2.

Rocky Mountain Gun Owners (RMGO) and the National Foundation for Gun Rights, along with a man named Martin Carter Kehoe, sued the county over the ordinance.

On Aug. 30, U.S. District Judge Charlotte N. Sweeney approved the TRO, thus halting the enforcement of the ordinance for a period of 14 days (pdf).

Sweeney pointed out that violating a constitutional right qualifies as irreparable harm and decided that the plaintiffs have a “substantial likelihood” of winning the case on merit.

“Plaintiffs allege that their Second and Fourteenth Amendment rights will be violated by the Ordinance,” and therefore the claim satisfies the irreparable harm factor, the order states.

Sweeney granted the TRO against the provisions in the bill, but deferred on the motion for a preliminary injunction, noting that a hearing will be set after a status conference on Sept. 8.

The order allows the county to enforce a part of Ordinance 2022-5 dealing with banning rapid-fire trigger activators, which are devices that increase the rate of trigger activation, or firing, of guns.

In an Aug. 30 press release, Taylor Rhodes, executive director of RMGO, stated that gun owners in Colorado are “sick and tired” of being treated like second-class citizens and being subjected to gun control laws.

“Because of the correctly decided Bruen decision authored by [Supreme Court] Justice [Clarence] Thomas this summer, the floodgates are open, and we are taking back the rights that evil tyrants stole from us,” Rhodes stated.

“All judges, no matter their political persuasion, will be forced to rule that our right to keep and bear arms cannot be infringed—and that’s exactly why this TRO was issued,” he said.

In the case of the New York State Rifle & Pistol Association Inc. v. Bruen, the Supreme Court ruled that the Second Amendment protects American citizens’ constitutional right to carry a gun outside of their homes.

RMGO has also sued local governments in the Colorado cities of Louisville, Superior, and Boulder over similar gun control ordinances.

After Sweeney granted the TRO, attorneys for Superior, Louisville, Boulder City, and Boulder County moved to consolidate their individual cases into one. Local officials have also agreed to suspend enforcement of the ordinance pending a final decision on the injunction.

If the cases are consolidated, a hearing for the preliminary injunction will be scheduled for January 2023, RMGO stated.