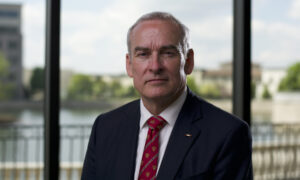 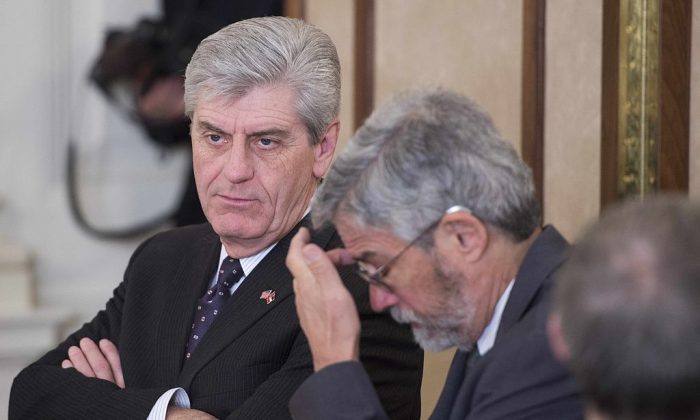 Mississippi Gov. Phil Bryant (L) during a meeting of the National Governors Association at the White House on Feb. 23, 2015. (Jim Watson/AFP/Getty Images)
Politics

A U.S. federal judge has struck down a Mississippi law that bans most abortions after 15 weeks, ruling that it “unequivocally” violates women’s constitutional rights.

The law, considered one of the most restrictive in the country, was passed in March. It had already been put on hold by U.S. District Judge Carlton Reeves after the state’s lone abortion clinic, Jackson Women’s Health Organization, immediately sued.

Under U.S. Supreme Court precedent, states may not ban abortions before a fetus is viable, and the medical consensus is that viability typically begins between 23 and 24 weeks, Reeves wrote on Nov. 20. Several states have 20-week abortion bans in place.

“The ban’s lawfulness hinges on a single question: whether the 15-week mark is before or after viability,” Reeves, who was nominated by President Barack Obama, wrote in his ruling (pdf). “The record is clear: States may not ban abortions prior to viability; 15 weeks [from a woman’s last menstrual period] is prior to viability.”

Mississippi lawmakers had argued that because the law made exceptions in the case of a medical emergency or severe fatal abnormality, it didn’t place an “undue burden” on a woman choosing whether or not to get an abortion.

The decision effectively invalidates a similar 15-week ban in Louisiana, which was set to take effect only if the Mississippi law survived a court challenge. A bill that would ban abortions of fetuses with heartbeats is currently making its way through the Ohio legislature.

The judge claimed that Mississippi elected officials had passed the statute they knew was unconstitutional.

“The real reason we are here is simple. The state chose to pass a law it knew was unconstitutional to endorse a decadeslong campaign, fueled by national interest groups, to ask the Supreme Court to overturn Roe v. Wade,” Reeves wrote, referring to the 1973 U.S. Supreme Court case.

“This court follows the commands of the Supreme Court and the dictates of the United States Constitution, rather than the disingenuous calculations of the Mississippi Legislature,” he added. The U.S. Constitution doesn’t mention abortion.

In another part of his ruling, the judge claimed that the state Legislature’s “professed interest in ‘women’s health’ is pure gaslighting,” telling them they should focus on “our alarming infant and maternal mortality rate.”

The state has the highest infant mortality rate in the country, with 9.08 out of every 1,000 live births dying before their 1st birthday, the Centers for Disease Control said in a report (pdf) earlier this year. University of Mississippi Medical Center neonatologist Mobolaji Famuyide told WLBT that the rate is due to a high number of premature births and a lack of health care in rural areas.

Gov. Phil Bryant hasn’t commented on the ruling but said in March after signing the ban, “I am committed to making Mississippi the safest place in America for an unborn child.”

In 2014, Bryant said in a State of the State Address that he hoped to ban abortion completely, NPR reported.

Earlier in November, he talked about what he saw as “the genocide of over 20 million African-American children” in the United States since Roe v. Wade, the Associated Press reported.