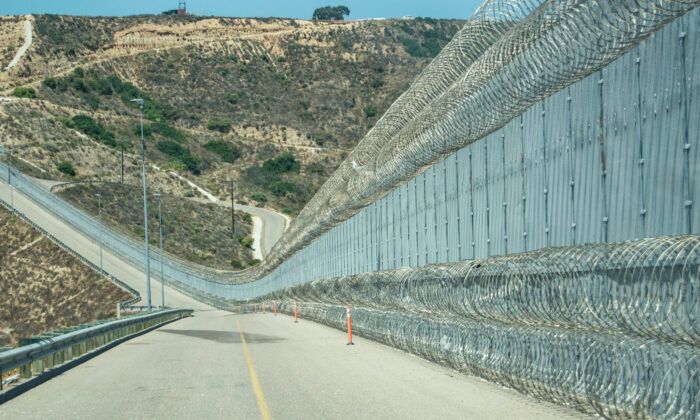 The secondary fence of the U.S.-Mexico border is near an area popularly known as "Smuggler's Gulch," in San Diego on July 12, 2017. The Border Patrol added a second layer of concertina wire along the bottom of the fence which helped curtail assaults on agents. (Joshua Philipp/The Epoch Times)
US News

A federal judge in Texas ruled last week that President Donald Trump’s invocation of the National Emergencies Act to free up funding, mostly from Department of Defense appropriations, to build part of the border wall on the nation’s porous border with Mexico was unlawful.

The Trump administration is expected to appeal the ruling.

In the proclamation, Trump declared that the “current situation at the southern border presents a border security and humanitarian crisis that threatens core national security interests and constitutes a national emergency.” The southern border, he wrote, “is a major entry point for criminals, gang members, and illicit narcotics.”

“Recent years have seen sharp increases in the number of family units entering and seeking entry to the United States and an inability to provide detention space for many of these aliens while their removal proceedings are pending,” Trump added.

But Briones rejected the reasoning provided by the president.

“The Proclamation is unlawful because the funding plan violates the CAA generally and … § 739 [specifically],” the judge wrote.

CAA refers to the Consolidated Appropriations Act approved by Congress; Section 739 prohibits funds covered under the statute from being used for any project not specifically listed in the legislation.

But Briones didn’t issue an injunction and instead gave the litigants 15 days to make submissions about what to do next. Specifically, he directed the successful parties to file a proposed preliminary injunction with 10 days of the decision, after which the administration would have five days to respond.

“We are elated that Texas federal court sided with us in handing a judgment based on justice and common sense. This decision today will prevent the transfer of these funds by the Defense Department for the construction of this useless and illegal border wall. There is no emergency at the border. This action was based on a distortion of the reality on the ground for our border communities. We, along with our partners, always knew that the use of military funds for the construction of a border wall was illegal. It’s time to abandon this ridiculous idea.”

The lawsuit was brought by El Paso County, Texas, and the Border Network for Human Rights.

It’s unclear what effect the judge’s Oct. 11 ruling will have. That’s because, on July 26, the Supreme Court overturned a lower court order preventing the administration from moving forward with expanding the border wall with Mexico.

Gilliam also made a claim that legal experts say is highly questionable, falsely accusing Trump of violating the separation of powers doctrine and infringing on Congress’s power of the purse. It’s true that Congress refused to give the president all the funding he requested to construct a border barrier. As Congress denied those appropriations, on Feb. 15, Trump invoked his congressionally approved powers under the National Emergencies Act of 1976, a statute that gave presidents the power to declare emergencies within limited parameters.

Writing in The Hill newspaper in January 2019 about Trump’s use of the law, left-leaning constitutional law professor Jonathan Turley stated, “Congress expressly gave presidents the authority to declare such emergencies and act unilaterally.”

As Turley points out, this authority has been evoked in “roughly 30 such emergencies that continue to this day” with little or no controversy until the current president invoked it. Lawmakers have tried and failed to overturn Trump’s use of the law to secure border wall construction funding.