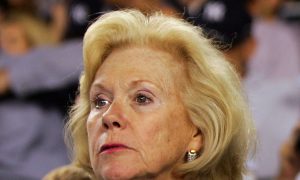 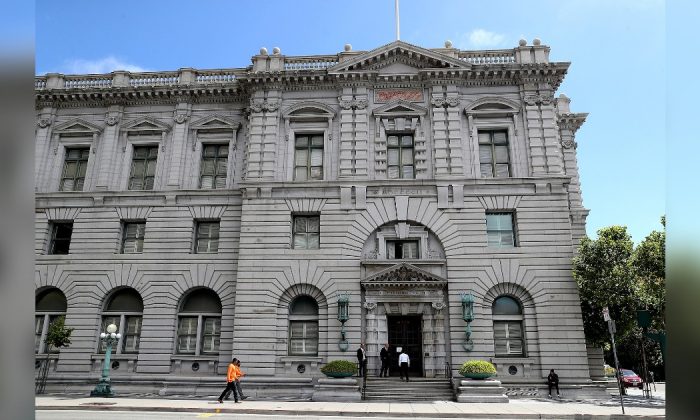 A view of the Ninth U.S. Circuit Court of Appeals in San Francisco, California, on June 12, 2017. (Justin Sullivan/Getty Images)
US News

A federal judge in Oregon ruled Aug. 7 that the Trump administration isn’t allowed to withhold millions of dollars in law enforcement grants from the state in an effort to make it comply with federal immigration enforcement officials.

In late 2018, Oregon and the city of Portland, which are located within the territory of the often-reversed 9th Circuit Court of Appeals, sued the U.S. government after the Department of Justice withheld grants under the Edward Byrne Memorial Justice Assistance Grant (JAG) Program, after the administration began a campaign to pressure so-called sanctuary jurisdictions to cooperate with immigration law enforcement, a federal responsibility.

The program, created by Congress in 2005, is named after a New York police officer killed in the line of duty in 1988 at age 22. Grants are distributed based on, among other factors, the recipient jurisdiction’s population and rates of violent crime.

Portland’s mayor is Ted Wheeler, an elected Democrat whom critics accuse of being either too soft on or an ally of Antifa, the violent purportedly anti-fascist movement. Independent journalist Andy Ngo, known for documenting Antifa’s violence, was himself reportedly assaulted by members of the group June 29 in Portland; the Quillette editor and photojournalist suffered a brain hemorrhage that required him to stay in a hospital overnight.

Wheeler hailed the lawsuit in November when it was initiated. “The City of Portland maintains that it is and has been in compliance with federal law, making the denial of federal funds to support our community unjust and unwarranted.”

Although there is no precise legal definition for what constitutes a sanctuary city or state, since 1987, Oregon law has limited how much the state can participate in immigration enforcement actions.

Police in the state are forbidden from detaining individuals accused of immigration law violations but no other legal violations. The policy prevents authorities from keeping individuals wanted by U.S. Immigration and Customs Enforcement (ICE) beyond their sentences to be handed over to ICE, unless the feds present a warrant signed by a judge. Portland has its own policy in place that prevents local police from taking action based solely on a person’s immigration or citizenship status.

In Eugene, Oregon, on Aug. 7, U.S. District Judge Michael J. McShane held that the Trump administration doesn’t have the lawful authority to impose conditions on grants provided by Congress. McShane was appointed to his post by then-President Barack Obama in 2013.

McShane found that the Trump administration’s attempt to attach legal strings to the grants ran afoul of the Tenth Amendment to U.S. Constitution, which states that powers not specifically assigned to the federal government are retained by the states or the people.

McShane found the administration’s policy backed Oregon into a corner, forcing it to choose between continuing to support its policies hindering federal immigration enforcement and forgoing “critical law enforcement funds.”

“Plaintiffs would, under any of these circumstances, risk public safety by eroding trust with immigrant communities or abandoning critical law enforcement initiatives funded by the Byrne JAG Program,” the judge wrote.

Oregon Gov. Kate Brown and Attorney General Ellen Rosenblum, both Democrats, filed suit last year in hopes of reinstating $4 million in fiscal 2017 and 2018 grants to the Beaver State, claiming Oregon was “unlawfully deprived” of the money. Portland’s share of the grants is said to be $780,000.

“The U.S. government’s decision to withhold public safety dollars on account of our status as a sanctuary state was just simply wrongheaded,” Rosenblum told reporters after the ruling was made public. “I remain committed to supporting our law enforcement officers’ ability to protect and serve all residents of Oregon regardless of where they were born or their immigration status.”

The decision in the case of Oregon’s eligibility for federal funding is one in a series of 9th Circuit decisions blocking Trump administration initiatives regarding illegal immigration.

Another 9th Circuit judge, U.S. District Judge William H. Orrick III, who was appointed by Obama in 2013, entered a permanent nationwide injunction on Aug. 1, 2018, against Executive Order 13768, which President Donald Trump signed Jan. 25, 2017, and which withheld federal funding from so-called sanctuary jurisdictions that refuse to cooperate with federal immigration authorities.

In April, San Francisco-based Judge Richard Seeborg, appointed in 2010 by Obama, ruled against the Trump administration in a case called Innovation Law Lab v. Nielsen. Seeborg halted the administration’s program requiring asylum-seekers at the southern border to wait in Mexico while their claims are processed.