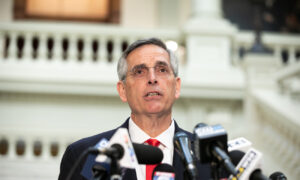 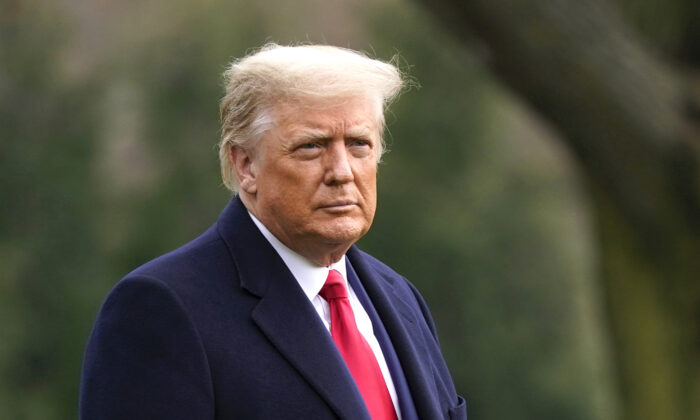 President Donald Trump walks on the South Lawn of the White House in Washington, on Dec. 12, 2020. (Patrick Semansky/AP Photo)
Georgia

A federal judge on Tuesday rejected President Donald Trump’s request to de-certify 2020 election results in Georgia over allegations that thousands of ballots were “illegally” cast and counted.

Trump filed the lawsuit on New Year’s eve just before media outlets received a leaked audio recording of a call between the president and Georgia Secretary of State Brad Raffensperger. The leaked conversation, which was said to be a confidential legal settlement discussion over several Georgia lawsuits, garnered widespread scrutiny after parts of the call were initially released by the media.

The lawsuit asks the court to grant an injunction ordering Gov. Brian Kemp and Raffensperger to de-certify the Nov. 3 election results that it claims had been certified in violation of the U.S. Constitution and declare that Georgia election laws were not followed during the 2020 election, resulting in “illegal” votes to be cast.

“[Trump] does not seek a remedy disenfranchising any lawful votes,” Trump’s legal team wrote in a motion (pdf) asking the court to expeditiously consider the claims. “Rather, he asks the court to uphold the rule of law and the important segregation of powers principles in the Georgia Constitution (executive vs. legislature), which are fundamentally intended to protect all voters in the country.”

U.S. District Court Judge Mark Cohen for the Northern District of Georgia rejected the request during a hearing on Tuesday. He ruled that Trump lacked the legal standing—or legal right—to bring the suit over claims under the Electors Clause and Due Process Clause in the U.S. Constitution.

Cohen also said that his court lacked the jurisdiction to grant Trump’s request to de-certify the election results as the president’s election contest is still pending in a state court.

“Plaintiff offers no authority to support a federal court hijacking a pending state election contest case under any circumstances, and certainly not when the failure to expedite was the result of Plaintiff’s own actions,” Cohen wrote in his order (pdf).

He also said that the only mode now for challenging the Electoral College votes is for lawmakers to object to votes on Jan. 6.

The judge also found that Trump’s team failed to establish a likelihood of success in his claims and show that Trump would suffer “irreparable harm” if an injunction was not granted.

“The State of Georgia has sixteen (16) votes in the electoral college. If this Court did grant the relief requested, it would not change the result of the November 3, 2020, Presidential Election that Joseph R. Biden, Jr. obtained the 270 or more electoral votes needed for election as President,” Cohen wrote.

“The violations above (and others) have resulted in more than 11,779 ‘illegal’ votes to be counted in the State of Georgia which is sufficient to change the outcome of the election or place the outcome in doubt,” the lawyers wrote in the complaint (pdf).

“Simply put, illegal votes cannot be counted and cannot be a part of a lawful certification by Defendants as a matter of law,” they added.

Kemp and Raffensperger’s team responded by rejecting the claims.

“The election, certification, and casting of ballots are final and over. The matter is now before Congress as set forth in 3 U.S.C. § 15 to count the certified votes,” the lawyers wrote (pdf). “Georgia has completely complied with all requirements under the United States Constitution, federal and state election law.”

Trump’s case against Raffensperger in the state court is still ongoing.

Trump’s Twitter post stated: “I spoke to Secretary of State Brad Raffensperger yesterday about Fulton County and voter fraud in Georgia. He was unwilling, or unable, to answer questions such as the “ballots under table” scam, ballot destruction, out of state “voters”, dead voters, and more. He has no clue!”