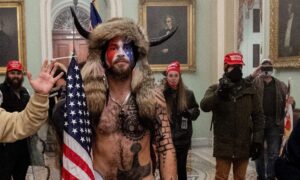 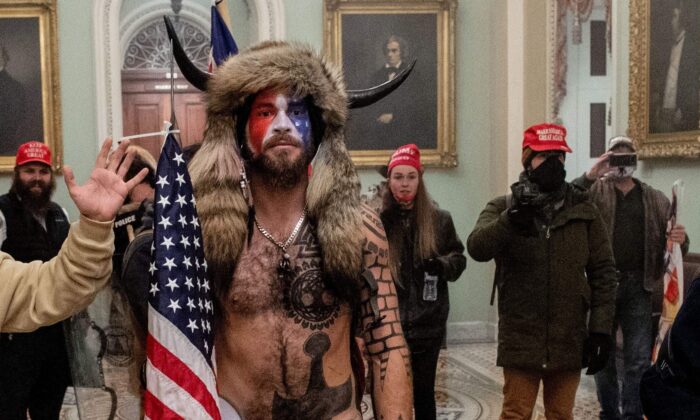 Jacob Chansley (C) entered the Capitol building during a protest with his painted face and horned hat in Washington, on Jan. 6, 2021. (Saul Loeb/AFP via Getty Images)
Judiciary

A federal judge has ruled that the so-called “QAnon Shaman” must remain in government custody pending further legal proceedings for his role in the Jan. 6 breach of the U.S. Capitol, because he still constitutes a threat to the public.

U.S. District Court Judge Royce Lamberth ruled Monday that comments made by the self-proclaimed “QAnon Shaman,” Jacob Chansley, show that he is not remorseful for his actions.

That Chansley believes his actions during the Capitol breach were peaceful shows “a detachment from reality,” the judge wrote in a 32-page opinion.

“Defendant characterizes himself as a peaceful person who was welcomed into the Capitol building on January 6th by police officers,” Lamberth wrote. “The Court finds none of his many attempts to manipulate the evidence and minimize the seriousness of his actions persuasive.”

Chansley was seen shirtless at the Capitol building on Jan. 6, wearing a distinctive hat with horns. He told a U.S. Capitol Police officer and an FBI agent the following day that he traveled to Washington because Trump called for all “patriots” to go there to protest as Congress met in a joint session.

Chansley was arrested in January and charged with civil disorder, disorderly conduct, and obstruction of an official proceeding, among other counts.

Arizona prosecutors previously said he allegedly left a note saying that “it’s only a matter of time, justice is coming.” They further stipulated “strong evidence, including Chansley’s own words and actions at the Capitol, supports that the intent of the Capitol rioters was to capture and assassinate elected officials in the United States government.”

That claim was also echoed by Sen. Ben Sasse (R-Neb.), a critic of Trump.

In rejecting Chansley’s pre-trial release, Lamberth ruled that his refusal to follow orders from law enforcement officers and Capitol Police during the breach indicates that, if released, he could break his release conditions, or disobey police orders.

He added that the language adopted by Chansley on social media at the time could be seen as threatening, or as signaling that he could carry out violent actions in the future.

According to Lamberth, Chansley directed a threat at former Vice President Mike Pence, and previously wrote that he supported the hanging of “traitors.”

“These are not the actions of a person who is shy about breaking the law,” the judge wrote.

In an interview with CBS News’ “60 Minutes Plus” last week, Chansley said that his actions “were not an attack on this country.”

“That is incorrect. That is inaccurate entirely,” he said. “I sang a song and that’s a part of Shamanism. It’s about creating positive vibrations in a sacred chamber.”

“I also stopped people from stealing and vandalizing that sacred space, the Senate. I actually stopped someone from stealing muffins out of the break room. I also said a prayer in that sacred chamber because it was my intention to bring divinity, to bring God back into the Senate,” he added.

He claimed that police officers “waved” him into the Capitol building on Jan. 6.

“That is the one very serious regret that I have, was believing that when we were waved in by police officers that it was acceptable,” Chansley said.

“I developed a lot of sympathy for Donald Trump because it seemed like the media was picking on him,” Chansley continued. “It seemed like the establishment was going after him unnecessarily or unfairly and I had been a victim of that all of my life whether it be at school or at home, so in many ways I identified with many of the negative things he was going through.”

Chansley has pleaded not guilty to two felony and four misdemeanor charges.