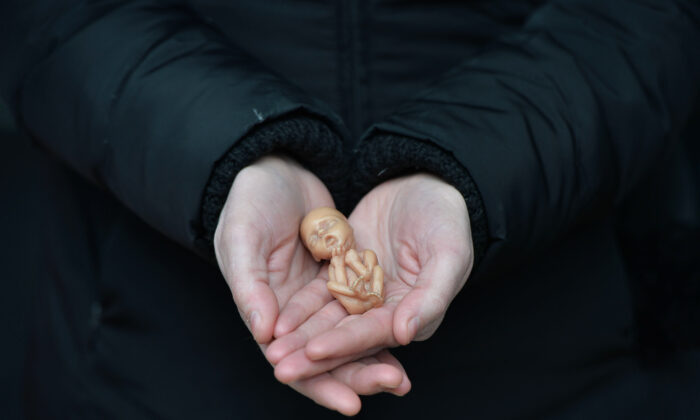 A pro-life campaigner displays a plastic doll representing a 12-week-old fetus as she stands outside the Marie Stopes Clinic in Belfast, Northern Ireland on April 7, 2016. (Charles McQuillan/Getty Images)
US News

A federal judge has ruled that North Carolina’s law banning abortions after 20 weeks of gestation, except in an urgent medical emergency, is back in force.

U.S. District Judge William Osteen’s decision on Aug. 17 eliminates an injunction he had issued against the 20-week abortion ban in 2019. He said that the U.S. Supreme Court’s decision on June 24 in the case that overturned Roe v. Wade—Dobbs v. Jackson Women’s Health—had erased the legal foundation for his 2019 ruling.

“Neither this court, nor the public, nor counsel, nor providers have the right to ignore the rule of law as determined by the Supreme Court,” wrote Osteen, an appointee of Republican President George W. Bush.

Osteen, of the Middle District of North Carolina, had declared in 2019 that North Carolina’s 20-week abortion ban was unconstitutional and could not be enforced as it would violate the U.S. Supreme Court’s 1973 Roe v. Wade decision.

The 20-week abortion ban in North Carolina had been in effect from 1973 until Osteen’s 2019 injunction, which was issued in a federal lawsuit filed in 2016 on behalf of abortion providers in the state, in a case called Bryant v. Woodall. In 2021, the Fourth Circuit Court of Appeals upheld Osteen’s decision.

Roe v. Wade had prohibited states from banning abortions prior to when the fetus is deemed “viable”—or potentially able to live outside its mother’s womb—deemed at around the second trimester of pregnancy at 24 weeks.

On July 8, Osteen filed an order in the Bryant v. Woodall case asking all parties in the lawsuit to file briefs within 30 days with their positions on whether he should lift the injunction. He wrote in the order that, given the U.S. Supreme Court’s decision on June 24, “It appears the injunctive relief granted in this case may now be contrary to law.”

Leaders of North Carolina’s Republican General Assembly in a friend-of-the-court brief asked Osteen to remove his 2019 injunction. North Carolina Senate leader Phil Berger and House Speaker Tim Moore wrote in the brief filed on July 27: “North Carolina’s abortion statutes are undeniably lawful under Dobbs, and there is no longer any basis for an injunction to shackle the state from pursuing its legitimate interests.”

Their brief came after North Carolina Attorney General Josh Stein, a Democrat, whose office is representing the defendants in the Bryant v. Woodall case, on July 1 and later on July 21 declined Berger’s and Moore’s request to seek enforcement of the 20-week abortion ban, including that he bring the ban before a judge himself.

Moore previously said that any legislation restricting abortion would most likely be vetoed by Gov. Roy Cooper, a Democrat who believes abortion is a right. Republicans would need to win at least five additional seats in November to obtain a veto-proof supermajority in North Carolina’s legislature.

Stein’s office argued in a brief filed late Aug. 8 that reinstating the abortion ban in North Carolina would create “significant risk of public confusion” about the availability and legality of abortion services in the state. Staff attorneys in Stein’s office filed the brief without his involvement. On Aug. 10, Stein said he would “do everything” in his power as attorney general to guard what he characterized as “women’s right to reproductive care.”

Following Osteen’s decision to reinstate the abortion ban, Moore said in a statement: “I am encouraged that, although our attorney general has failed to do his duty, today we have a ruling that upholds the law.”

Cooper said in a statement in response to the decision: “Although I disagree with this ruling, the vast majority of patients will still be able to access reproductive health care in North Carolina, and I remain committed to protecting it.”

Republicans have said that little will change with the 20-week abortion ban reinstated. In 2019, fewer than 1 percent of abortions nationwide were performed after 20 weeks of gestation, consistent with data from previous years, according to the Centers for Disease Control and Prevention.

Cooper had previously signed an executive order on July 6 to shield people criminally charged with performing abortion from being extradited to other states and prohibiting North Carolina state agencies from aiding other states’ prosecutions of people who travel for the procedure.