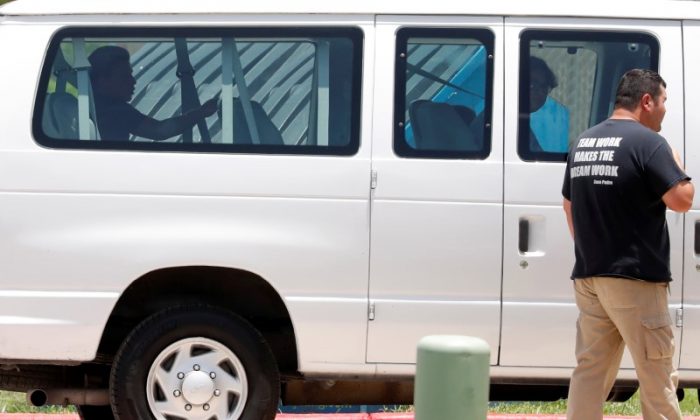 A minor sits in the back of a van as he is transported to Casa Esperanza, a federal contracted shelter in Brownsville, Texas, on July 11, 2018. (Carlos Barria/Reuters)
US News

A federal judge on Friday praised the administration’s efforts to reunify young children and families separated at the border.

AP reported that U.S. District Judge Dana Sabraw said at a hearing in San Diego that the government has demonstrated good faith and largely complied with a deadline this week to reunite families with children under 5.

Sabraw also said he plans to watch closely as the July 26 deadline approaches to reunite more than 2,500 older children with their families, according to AP.

“That is going to be a significant undertaking,” Sabraw said on Tuesday of the deadline.

The judge had earlier ordered the government to reunite children under the age of 5 by Tuesday, July 10, and all separated children by July 26.

Administration officials said in a statement on Wednesday, that all migrant children under age 5 who were separated at the U.S.-Mexico border would have been reunited with their parents by early Thursday morning if they were eligible.

According to the Department of Homeland Security (DHS), just 57 of the 103 children under 5 separated at the border recently were eligible to be reunited with the adults who brought them, The Epoch Times reported.

The 57 had successfully been reunited by early July 12, just beyond the July 10 deadline.

During the reunification process, the DHS discovered that 46 of the children were not eligible to be reunified due to issues with the adult—including safety concerns, which equals almost 45 percent of the cases.

Seven adults were determined not to be a parent, while another 11 have serious criminal histories, including charges or convictions for child cruelty, kidnapping, murder, human smuggling, and domestic violence.

“Throughout the reunification process our goal has been the well-being of the children and returning them to a safe environment,” said Health and Human Services Secretary Alex Azar, DHS Secretary Kirstjen Nielsen, and Attorney General Jeff Sessions in a statement.

“Our agencies’ careful vetting procedures helped prevent the reunification of children with an alleged murderer, an adult convicted of child cruelty, and adults determined not to be the parent of the child. Certain facts remain: The American people gave this administration a mandate to end the lawlessness at the border, and President Trump is keeping his promise to do exactly that. Our message has been clear all along: Do not risk your own life or the life of your child by attempting to enter the United States illegally. Apply lawfully and wait your turn,” the statement continued.

The U.S. government is working to reunite children with parents who were detained and separated as part of the current administration’s more stringent approach to reduce illegal immigration.