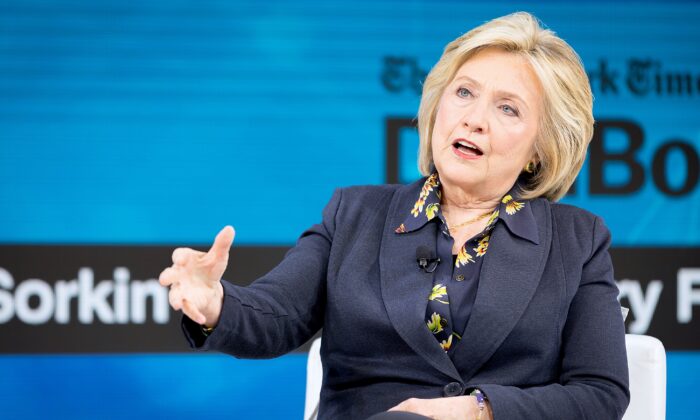 WASHINGTON—Former Secretary of State and 2016 Democratic presidential nominee Hillary Clinton likely won’t know until after New Year’s Day if she and her former chief of staff, Cheryl Mills, will face direct cross-examination under oath by attorneys for Judicial Watch.

U.S. District Court for the District of Columbia Judge Royce C. Lamberth on Dec. 19 delayed his expected ruling on the nonprofit government watchdog’s request that he order Clinton and Mills to submit to the questioning.

“I don’t know if he’s going to do anything before Christmas at this point. I would expect the order to come probably after the first of the year,” she said.

The Benghazi scandal and Clinton’s use of an insecure private email server located in her New York mansion are linked because of a 2014 Judicial Watch Freedom of Information Act (FOIA) lawsuit.

That lawsuit sought information about the government’s handling of the Sept. 11, 2012, attack on a U.S. diplomatic compound in Benghazi, Libya, by radical Islamic terrorists that killed four Americans, including U.S. Ambassador Christopher Stevens.

Documents obtained in the litigation against the State Department led directly to the public exposure in March 2015 of the private Clinton email system she used from 2009 to 2013 to conduct official U.S. diplomatic business.

Dozens of highly sensitive classified materials were sent to and from Clinton on the system, which the FBI said was vulnerable to compromise by hackers outside the United States and by foreign intelligence operatives.

In a September ruling in the suit, Lamberth encouraged Judicial Watch to “shake this tree” and denounced the State Department, saying, “There is no FOIA exemption for political expedience, nor is there one for bureaucratic incompetence.”

Lamberth also declined in the Dec. 19 hearing to rule on a Judicial Watch motion that he order Paul Combetta to submit to a deposition regarding his role in transferring Clinton emails to another private email account, carterheavyindustries@gmail.com.

Clinton turned over to the State Department 33,000 emails from her private system that she said concerned official business, but she kept another 30,000 that she said were about private matters. Despite multiple subsequent public releases of Clinton emails, new emails are still being found in government searches.

Combetta worked as an information technology (IT) specialist for Platte River Networks, a digital firm retained by Clinton to maintain her private email system. Judicial Watch wants permission from the court to subpoena Google for records of the carterheavyindustries@gmail.com account used by Combetta.

Government attorneys representing the State Department told Lamberth in a Dec. 18 filing that he should deny Judicial Watch’s deposition and subpoena requests because “it is self-evident that Mr. Combetta has no relevant information concerning the State Department’s search for documents responsive to the FOIA request at issue in this case.”

“And, in any event, the circumstances concerning Mr. Combetta’s use of a Gmail account and the federal government’s attempts to recover former Secretary Clinton’s emails from that Gmail account are well-known and publicly documented.”

Judicial Watch’s Cotca told The Epoch Times that “at this point, five years ago is when Secretary Clinton returned the emails, and the State Department is still getting batches of emails. So the question is, are there more emails in places where they can be found?”