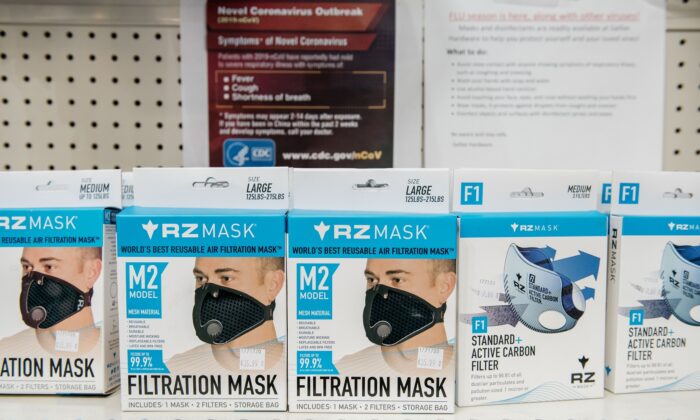 Signs detailing the Center for Disease Control's advice for combatting Coronavirus are displayed above facemasks at a Manhattan hardware store in New York City on Feb. 26, 2020 in New York City. (Scott Heins/Getty Images)
By Matthew Vadum

A federal judge in Oklahoma issued a temporary injunction April 6 against that state’s ban on abortion procedures during the CCP virus pandemic, ruling that the governor’s emergency order shutting down abortions went beyond his emergency powers.

In the case at hand, U.S. District Judge Charles B. Goodwin, a Trump appointee, held that the Oklahoma prohibition would cause “irreparable harm” to women who were unable to procure abortions.

“The case raises an issue that has long been a source of struggle for the courts: the proper use of the judicial power in reviewing laws and executive orders or actions taken in response to a public health emergency,” the judge wrote in his 14-page ruling, The Norman Transcript reports.

The state enjoys wide powers during this crisis and is allowed to temporarily intrude on the rights of its residents, but such authority has its limits, he wrote.

“The court concludes that while the current public health emergency allows the state of Oklahoma to impose some of the cited measures delaying abortion procedures, it has acted in an ‘unreasonable,’ ‘arbitrary,’ and ‘oppressive’ way—and imposed an ‘undue burden’ on abortion access—in imposing requirements that effectively deny a right of access to abortion,” Goodwin wrote.

“Further the Court concludes that the benefit to public health of the ban on medication[-induced] abortions is minor and outweighed by the intrusion on Fourteenth Amendment rights caused by that ban.”

The postponement mandated by Oklahoma would make it impossible for state residents to get an abortion before April 30, when the emergency order lapses, he ruled.

Oklahoma Gov. Kevin Stitt, a Republican, signed an executive order on March 24 requiring health care providers to put off all elective surgeries until the end of April to preserve medical supplies for health care workers combating the CCP virus pandemic.

“We must ensure that our health care professionals, first responders and medical facilities have all the resources they need to combat COVID-19,” Stitt reportedly said in a statement at the time. “I am committed to doing whatever necessary to protect those who are on the front lines fighting against this virus.”

A few days later, his office clarified that the order covers all abortions that aren’t considered to be medical emergencies.

The Center for Reproductive Rights and Planned Parenthood filed a lawsuit against the Sooner State arguing the conservative, pro-life governor was using the public health crisis as a pretense to crack down on abortions in general. State law forbids abortions after 20 weeks of pregnancy.

“Abortion is an essential and time-sensitive medical procedure that should not be caught in the crosshairs of political agendas—especially during this public health crisis.”

Oklahoma Attorney General Mike Hunter told CNN he was “very disappointed” by Goodwin’s order and planned a prompt appeal to the 10th Circuit Court of Appeals.

Allowing abortions “may encourage a flood of other judicially conjured exceptions, completely undermining the state’s ability to combat the worst public health crisis in Oklahoma history,” he said.

Meanwhile, a three-judge panel of the 5th Circuit Court of Appeals went the opposite direction late April 7, lifting U.S. District Judge Lee Yeakel’s temporary injunction blocking the Texas ban on most abortions during the pandemic, The Austin American-Statesman reports.

Texas Gov. Greg Abbott, a Republican, issued the emergency ban March 22 forbidding elective medical procedures in an effort to conserve hospital space and personal protective equipment. The state’s attorney general, Ken Paxton, also a Republican, said the next day that the ban covers abortions except where the woman’s life or health is at risk and said abortionists who continued operating would face criminal charges.

The Texas ban is considered one of the strictest of the temporary state-level abortion bans. Violators could be fined $1,000 or jailed for 180 days.