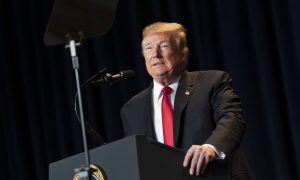 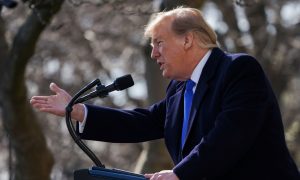 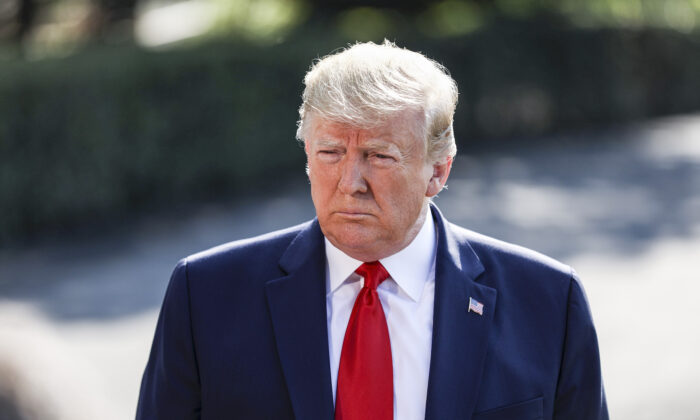 President Donald Trump speaks to media before departing on Marine One en route to Ohio and Texas, from the White House South Lawn in Washington on Aug. 7, 2019. (Charlotte Cuthbertson/The Epoch Times)
Texas

A federal judge has blocked the Trump administration from diverting $3.6 billion in military funds toward the construction of the border wall.

Judge David Briones of the Western District of Texas issued a permanent nationwide injunction (pdf) on Tuesday, ruling that the administration’s move to redirect the funds is “unlawful.” The administration is expected to appeal the decision.

The ruling is part of a lawsuit brought by El Paso County, Texas, and immigrant rights group Border Network for Human Rights on Oct. 11. They claimed that Trump’s national emergency declaration on Feb. 15, violated the 2019 Consolidated Appropriations Act (CAA) approved by Congress (pdf), and specifically its Section 739, which prohibits funds covered under the statute from being used for any project not specifically listed in the legislation.

Briones, an appointee of former president Bill Clinton, wrote in the Tuesday ruling, “After due consideration, the Court is of the opinion that a declaratory judgment and permanent injunction shall be granted in Plaintiffs’ favor.”

“It is finally ordered” that officials from the Trump administration are “permanently enjoined” from using the funds beyond the $1,375 billion in the 2019 CAA for border wall construction, Briones wrote.

“Defendants do not have compelling reasons justifying an administrative stay of this decision as they have requested, though they are free to pursue a stay pending an appeal before the Fifth Circuit,” Briones added.

“Last evening, a district judge in Texas issued another improper nationwide injunction, this time preventing the Administration from using a key source of funds to finish the southwest border wall,” the statement read. “A Federal statute authorizes the use of the funds by empowering the Secretary of Defense to ‘undertake military construction projects’ to support the Armed Forces during a national emergency.

“The district court issued a nationwide injunction on the theory that building the wall is causing “reputational” harm and economic disruption to a Texas county and an advocacy group in that county. But the court’s injunction sweeps far broader than that and blocks multiple projects that are hundreds of miles away and have nothing to do with these plaintiffs,” the press secretary added.

“The Supreme Court has already stayed one erroneous injunction blocking the use of a different statutory authority to build the border wall and the Administration plans to immediately appeal this incorrect decision, too.”

Briones previously ruled on Oct. 11 that the plaintiffs were able to bring the case forward. Specifically, he directed the plaintiffs to file a proposed preliminary injunction within 10 days of the decision, and let the administration respond to the proposal within five days.

Trump on Feb. 15 declared a national emergency that enabled $3.6 billion of Department of Defense funds, originally slated for military construction projects, to be redirected toward building some 175 miles of the U.S.-Mexico border wall. Defense Secretary Mark Esper authorized the redirecting of the funds in September.

“Recent years have seen sharp increases in the number of family units entering and seeking entry to the United States and an inability to provide detention space for many of these aliens while their removal proceedings are pending,” Trump wrote.

Briones noted that his latest ruling would not apply to the funds that did not require a national emergency declaration to be reallocated. Trump in February reallocated $3.1 billion from other departments toward border wall construction—$2.5 billion from Defense Department counterdrug activities and $601 million from the Treasury Department’s asset forfeiture fund.

This article was updated to include a statement from the White House.