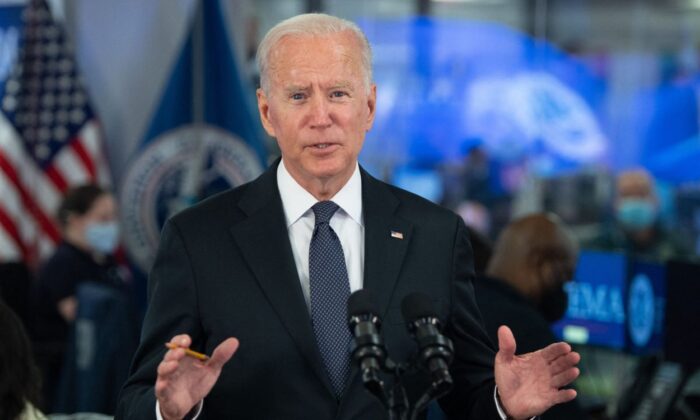 A federal judge on Thursday ruled against the Biden administration and said it cannot use the Trump-era rule to expel illegal immigrant families with children who were taken into custody at the border under a public health order.

Judge Emmet Sullivan of the District of Columbia District Court ruled that the federal government has enough power to use measures to mitigate the spread of COVID-19. Last year, former President Donald Trump’s administration utilized the Title 42 rule to expel certain illegal aliens as a pandemic containment measure, which the Biden administration kept intact.

“But in view of the wide availability of testing, vaccines, and other minimization measures, the Court is not convinced that the transmission of COVID-19 during border processing cannot be significantly mitigated. Indeed, the government has successfully implemented mitigation measures with regard to processing unaccompanied minors in order to minimize risk of COVID-19 transmission,” Sullivan, who was appointed by former President Bill Clinton, wrote in the order (pdf), which takes effect in 14 days.

President Joe Biden reportedly had plans to end Title 42 deportations earlier this summer but decided against it due to the Delta variant’s spread. But the Centers for Disease Control and Prevention (CDC) in August indefinitely extended Title 42 until the agency’s director, Rochelle Walensky, “determines that the danger of further introduction of COVID-19 into the United States from covered noncitizens has ceased to be a serious danger to the public health.”

After the injunction was handed down, White House press secretary Jen Psaki said reporters should ask the Department of Justice for comment.

“We’re focused on taking steps to address the root causes of migration, implement orderly asylum processes, strengthen collaborative migration management efforts in the region, and effectively secure our borders,” Psaki said, without elaborating on whether the Biden administration will consider an appeal of Sullivan’s ruling. “We’ve made considerable progress on that front.”

The American Civil Liberties Union (ACLU), which in August sought an injunction against Title 42, hailed Sullivan’s ruling on Thursday.

“President Biden should have ended this cruel and lawless policy long ago, and the court was correct to reject it today,” stated Omar Jadwat, the head of the ACLU’s Immigrants’ Rights Project.

The Biden administration, meanwhile, is still in discussions with the Mexican government about potentially restarting a version of the “Remain in Mexico” policy that was championed by Trump after the Supreme Court last month issued a ruling to essentially restore it.

In a separate move on Thursday, Texas Gov. Greg Abbott, a Republican, announced he is closing down six ports of entry from Mexico to Texas due to a surge of illegal immigrants in recent days. It comes after photos were taken at a bridge in Del Rio, Texas, showing thousands of people who crossed into the United States illegally under a bridge.