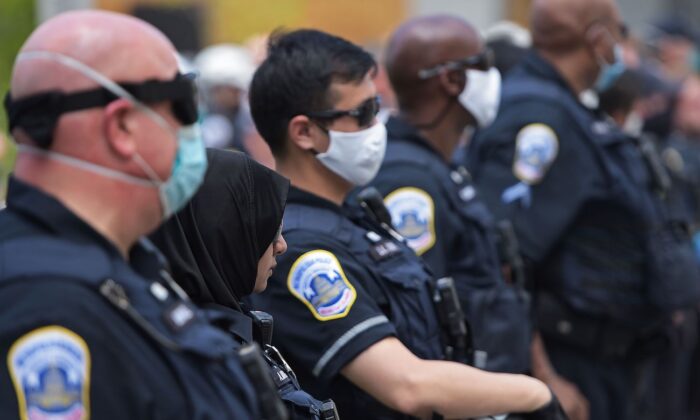 A federal judge has blocked a new law in Arizona that restricts the filming of police officers, siding with the Arizona Broadcasters Association, the American Civil Liberties Union (ACLU), and multiple media organizations who sued and argued that the law violated the First Amendment.

Tuchi gave the Legislature a week to decide whether it wants to defend the law. The ACLU and media groups are seeking a permanent injunction.

Will Not Defend the Law

The law, HB 2319 (pdf), was set to take effect on Sept. 24. It was enacted by the Republican-controlled state legislature in June and signed into law by Gov. Doug Ducey on July 6.

Text of the legislation says it is unlawful for a person to “knowingly make a video recording of law enforcement activity” if they are within 8 feet (2.5 meters) and has been warned by a police officer that they are not allowed to film. In a private area, a person who is authorized to be there can take recordings within 8 feet, but must stop if a police officer “determines that the person is interfering in the law enforcement activity or that it is not safe to be in the area and orders the person to leave the area.”

Violating the law would amount to a class 3 misdemeanor that would be punishable by up to 30 days in jail, $500 in fines, and up to a year of probation.

The judge’s decision came after Republican Attorney General Mark Brnovich and the prosecutor and sheriff’s office in Maricopa County told the judge they did not plan to defend the law. They were named as defendants in the lawsuit (pdf), which was filed on Aug. 23.

Brnovich’s office is charged with defending state laws. But in this case, his spokesperson, Katie Conner, said that because the attorney general does not have enforcement authority in these types of cases, they were the wrong party to sue. But Matt Kelley, an attorney who represented the news organizations that sued, argued in his court papers that Brnovich is not correct. He noted that by law the attorney general can step in and enforce laws that county prosecutors normally would.

The ACLU, which had called the law a “blatant attempt to gut First Amendment protections for recording police,” celebrated Tuchi’s decision. The ACLU of Arizona said on Twitter on Sept. 9 that the court decision is “a huge win” for Americans’ First Amendment rights, and “will allow Arizonans to continue to hold police accountable.”

State Rep. John Kavanagh (R-District 23), a retired police officer who sponsored the law, had argued that allowing people to record police up close while they are doing enforcement, like making arrests or dealing with a disturbed person, could put officers in danger, and noted that he made several changes to address the concerns of the ACLU. Those include changing the restriction from 16 feet (4.8 meters) to 8 feet.