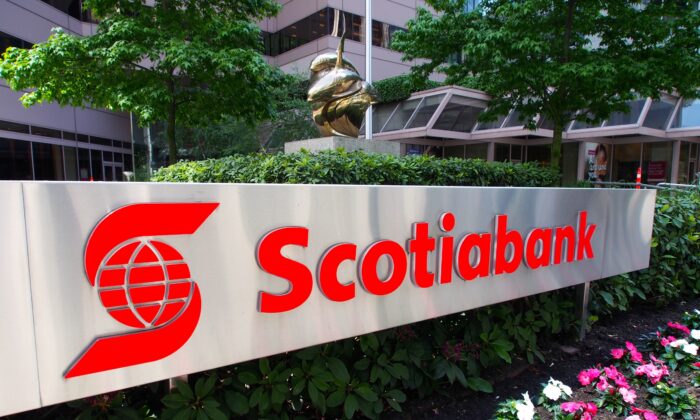 The sign outside a Scotiabank (Bank of Nova Scotia) in Vancouver, B.C., on June 7, 2014. (Robert MacPherson/AFP via Getty Images)
Canada

The federal package aimed at helping low-income earners weather inflation announced on Sept. 13 is likely to result in driving up inflation, says a Scotiabank economist.

“We will be assessing the implications for price pressures into H1 [first half of the year] but it seems sensible to assume that this will add to pressures on measures of core inflation relative to what would have otherwise occurred and hence aggravate the Bank of Canada’s stance on monetary policy,” wrote Derek Holt, vice president and head of capital markets economics at Scotiabank, on Sept. 13.

“Any belief that it will ease inflationary pressures must have studied different economics textbooks.”

While announcing the $4.5 billion package on Sept. 13, Prime Minister Justin Trudeau said the measures are “sufficiently targeted that we are confident that they will not contribute to increased inflation.”

The measures include doubling Goods and Services Tax (GST) rebate payments for six months, implementing the first phase of a national dental care program, and providing a one-time $500 rental allowance payment to low-income Canadians who pay at least 30 percent of their income on rent.

In his analysis, Holt cited data showing how much consumer spending increased on past occasions when the government increased supports. He says it’s likely some of those billions of dollars will be spent by households, though the amount is uncertain.

“This is what happened when the child benefit payments were sharply increased in years past with no strings attached to what was done with the proceeds as a surge in sales then gave way to a demand vacuum,” wrote Holt.

Lindsay Tedds, an associate professor of economics at the University of Calgary, argues that the GST rebate won’t create inflationary pressure due to its targeted distribution.

“(The GST rebate) is targeted to low-income individuals, who are probably the ones most unable to dip into savings or other things to pay for these increased costs. So, it’s unlikely to fuel inflation,” she said.

In his bulletin, Holt also reacted to the latest U.S. inflation data that sent stocks and bonds stumbling on Sept. 13, with the Dow Jones dropping 900 points.

While the U.S. Consumer Price Index (CPI) for August (8.3 percent) was lower than July (8.5 percent), it was higher than expected after aggressive rate hikes by the Federal Reserve.

The measure of core CPI, which excludes energy and food prices, rose to 6.3 percent year-over-year after hitting 5.9 percent in June and July.

“There is zero evidence that the pressures are durably cooling. That remains wishful thinking absent empirical supports,” wrote Holt.

He also sent a warning that food prices would continue to soar as key producing countries have been hit by droughts.

Holt said the latest U.S. inflation data and Ottawa’s new relief announcement “suggests that the BoC [Bank of Canada] is likely to be dragged along by the Fed with domestic fiscal stimulus reinforcing the likelihood that the policy rate breaches 4% by December if not October.”

The BoC raised its policy rate by 75 basis points to reach 3.25 percent on Sept. 7 and said it would continue its policy of quantitative tightening. The opposite, quantitative easing, in which central banks purchase securities and government bonds from financial institutions to maintain interest rates low, is what led to a massive increase in the money supply.

The BoC has further rate announcements planned for Oct. 26 and Dec. 7.