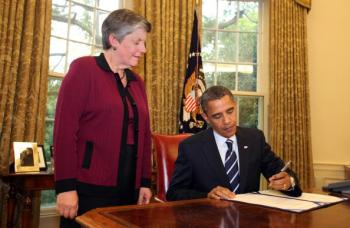 Ronny Dorry
View profile
Follow
biggersmaller
Print
Mortgage lenders will continue to be able to issue loans for the construction and renovation of multifamily and rental homes though the end of 2010 as result of legislation which the President recently signed into law.

HR 5872—the General and Special Risk Insurance Funds Availability Act—is a bill which extends the Federal Housing Authority's (FHA) commitment authority for its multifamily insurance programs by $5 billion for the remainder of the fiscal year.

The president signed the bill on Aug. 11, and also signed HR 5981 to allow the FHA to increase premiums for its single-family home program.

According to the Mortgage Bankers Association (MBA), without this legislation, the FHA would have exhausted its commitment authority by around mid-August and it would have been forced to stop issuing commitments to insure existing loans or applications until the next fiscal year, which begins Oct. 1.

“We are encouraged that FHA Commissioner Stevens has indicated he may not need to raise premiums to the maximum, and we believe that a small increase in the annual premium, coupled with a decrease in FHA’s upfront premium, will help stabilize FHA while lowering closing costs for many borrowers,” said Robert E. Story Jr., CMB, chairman of the MBA.

The FHA provides mortgage insurance on loans made by FHA-approved lenders throughout the United States and its territories. According to the U.S. Department of Housing and Urban Development, FHA-insured loans require little cash investment to close and provide more flexibility in calculating household income and payment ratios. The cost of the mortgage insurance is typically passed on to the homeowner and included in the monthly payment. However the loan cost to the homeowner will usually drop after five years or when the remaining loan balance is 78 percent of the value of the property—whichever is longer.