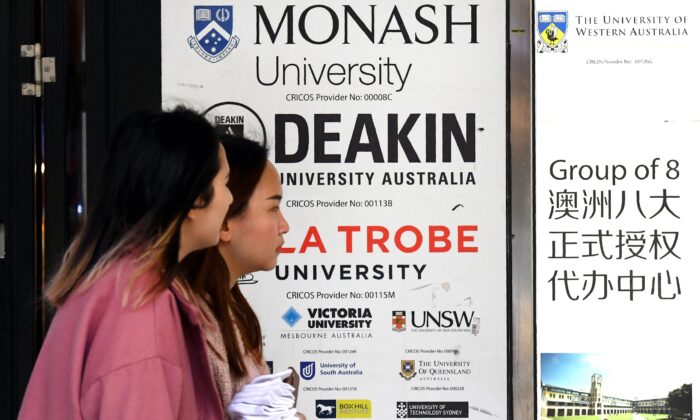 Australia’s new Labor government has been urged to develop a new funding strategy, so universities do not depend on fluctuating and decreasing international student fees for research projects.

“International students are a critical part of a healthy, prosperous Australia for all,” Chevrolle said on May 31.

But currently, Australia is in a position where it could reset the reputation of our universities as a leading education destination.

“We have a chance to reset our reputation as a leading education destination, but it will require changing the way we view these students—not as economic commodities, but as individuals who make a significant contribution to Australian society.”

Chevrolle argued that changes to degree funding implemented by the previous Coalition government as part of the Job Ready Graduate (JRG) reforms had exacerbated research funding pressures for universities, and these reforms need urgent reassessment.

The JRG changes radically altered how the Commonwealth funds degrees and the costs that students are required to pay, according to Study Group. Student fees for popular courses like humanities and arts were increased by 110 percent, and fees for courses delivering much-needed skills like teaching, nursing, science and engineering were cut by 20 to 60 percent to direct more students to those courses.

However, pressure on funding and operational costs has seen some universities reluctant to enrol students in high-cost degree programs, like sciences and engineering, because of inflation and rising energy prices.

Pressures on the financial bottom line also incentivise universities to replace domestic students with international students due to the higher fees they attract.

In 2021, international student enrolments in Australia fell 13 percent due to COVID restrictions. Government figures show that in 2019-20, total investment in research and experimental development as a percentage of GDP fell to 1.79 percent, down from 2.1 percent in the previous decade and below the OECD average, according to the education provider.

The comments from Chevrolle come after Salvatore Babones, an American scholar and associate professor at the University of Sydney, also raised concerns about the issue in his new book, ‘Australia’s Universities: Can They Reform?’

“When I say international students are themselves, victims, a lot of that is because they’re being offered a really low-class education,” Babones said on March 30. “Those resources are not being ploughed back into making sure you have a successful career at university.”

Babones noted that, unlike American universities, Australian schools do not invest in programs that help international students transition to universities, such as language classes.

The money is instead being “skimmed off” on a marginal revenue basis to fund strategic research projects controlled by senior university management, which will then be used to “fuel a rise up in the rankings for Australian universities.”

According to the Campus Morning Mail, an independent newsletter that provides an analysis of the university sector, highly cited researchers (HICI researchers) are identified as those who have been cited the most during the past ten years and are included in the Highly Cited Researchers List which ranks the world’s top one percent of researchers based on citations.

The more HICI researchers that are employed by an institution matter as the List counts 20 percent toward the position of your university in the Academic Ranking of World Universities, which is produced by the Shanghai Rankings.

Currently, 330 Australian researchers are included in the List, and 314 are affiliated with 29 universities, with the University of Queensland topping the list with 44 HICI researchers.

Chevrolle believes that to avoid a similar situation happening in Australia, a comprehensive and well-designed funding program is vital to support Australian universities to continue their world-class research programs.

This year, Australia is set to welcome back almost 60,000 international students with a further 50,000 student visa applications.

While this is good news for Australia’s economic and cultural diversity, Chevrolle said these students should not be viewed purely through the lens of what their fees will contribute to research initiatives.

“Considering the negative impacts of COVID-19, it’s time to double our efforts to make international students feel welcome and positive about considering Australia as a potential new home once again,” Chevrolle said.

“Of course, we are aware of the significant economic benefits international students deliver to our education systems and the economy more broadly, but we need to more fully recognise that they also make an important contribution to the cultural diversity that knits together the very fabric of Australia.”

The Epoch Times reached out to the Australian Department of Education for a comment but has not received a reply by the time of publication.