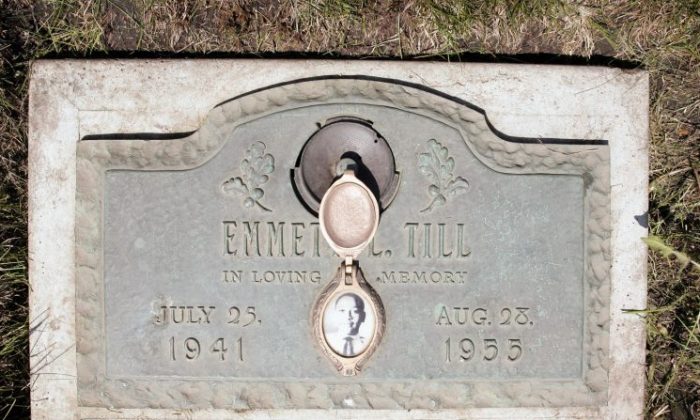 A plaque marks the gravesite of Emmett Till at Burr Oak Cemetery May 4, 2005, in Aslip, Ill. (Scott Olson/Getty Images)
US News

The United States government has reopened a probe into the slaying of Emmett Till, saying it has received new information.

Till, a 14-year-old black boy who lived in Chicago, was abducted in 1955 while visiting relatives in Mississippi.

His body was discovered three days later in a river.

According to the U.S. Department of Justice, two local men, Roy Bryant and J.W. Milam, were arrested and charged with Till’s murder but were acquitted in a jury trial.

“Both men subsequently admitted to a journalist in an interview that was published in Look Magazine that they murdered Till. Milam and Bryant died in 1981 and 1994, respectively,” the department stated.

The department received a request in 2004 to consider whether any potential surviving subjects in the murder could be prosecuted, and agents with the FBI assisted local law enforcement officials in a review of historical records and interviews of surviving witnesses, along with forensic analysis, to try and determine if there were any surviving subjects who could be charged. After being presented with the evidence collected, a grand jury declined to indict anyone for any criminal charge related to the homicide.

However, the Department of Justice said in a report sent to Congress that it’s once again reinvestigating the slaying after receiving new information.

The report was sent in March but was reported on for the first time on July 12, 2018, by The Associated Press.

The federal report does not indicate what the new information might be.

It could be related to a book published last year, “The Blood of Emmett Till,” written by Timothy Tyson. Tyson quotes Carolyn Donham, a white woman who lived in Mississippi at the time of the murder, as saying she wasn’t truthful when she claimed Till grabbed her and made sexual advances toward her while she was shopping in 1955.

Donham was married to Bryant at the time.

A man who answered the door at Donham’s residence in North Carolina declined to comment when reached by The Associated Press.

Paula Johnson, co-director of an academic group that reviews unsolved civil rights slayings, said she can’t think of anything else that could have prompted the latest reinvestigation.

“We’re happy to have that be the case so that ultimately or finally someone can be held responsible for his murder,” said Johnson, who leads the Cold Case Justice Initiative at Syracuse University.