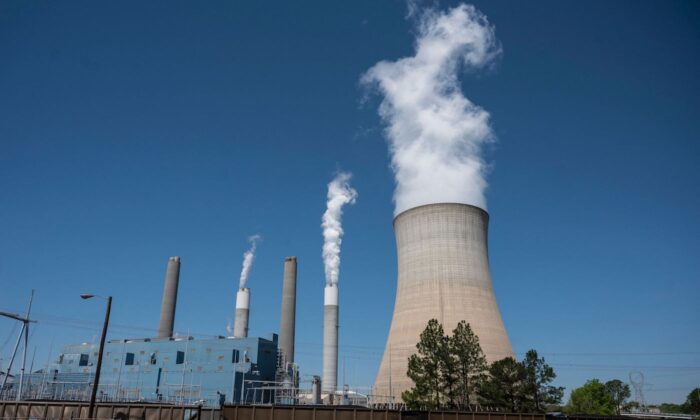 Steam rises from the Miller coal power plant in Adamsville, Ala. on April 13, 2021. (Andrew Caballero-Reynolds/AFP via Getty Images)
Policies & Impacts

Hidden deep within the more than 700 pages of the recently enacted Inflation Reduction Act (IRA) is a provision that intends to boost the Environmental Protection Agency’s (EPA) power to regulate greenhouse gas emissions.

Specifically, the IRA establishes the “Methane Emission Reduction Program” under a new section in the Clean Air Act, allowing the EPA to impose a fee on certain “air pollutants.”

Importantly, this is the first time the federal government has ever imposed a fee on any greenhouse gas (GHG) emissions and is part of Congress’ effort to bolster the EPA’s power to address the “climate crisis.”

In June, the U.S. Supreme Court ruled in West Virginia v. Environmental Protection Agency that the EPA didn’t have the authority under the Clean Air Act or the Clean Power Plan to essentially force power plants to transition more toward wind and solar.

Moreover, the court determined that the interpretive question raised under the Clean Power Plan fell under the “major questions doctrine,” which states that Congress must make a “clear statement” if it wants to delegate authority “of this breadth to regulate a fundamental sector of the economy.”

Biden further added that he planned to “find ways that we can, under federal law, continue protecting Americans from harmful pollution, including pollution that causes climate change.”

Enter the IRA and Congress’ “clear statement” on what it wants the EPA to do.

And the investments include more than $1.5 billion to the EPA for “grants, rebates, contracts, loans” and “other activities” to reduce GHG emissions in the natural gas and oil sector.

But incentives aren’t the only tool the IRA utilizes regarding the oil and gas sector.

According to a report from the Congressional Research Service (CRS), the Methane Emissions Reduction Program applies to specific types of facilities that report their GHG emissions to the EPA’s Greenhouse Gas Emission Reporting Program.

Specifically, the facilities that the charge applies to include:

In other words, the EPA now has the authority to impose charges on oil and gas power plants, fulfilling SCOTUS’s requirement.

More importantly, facilities that fall under one or more of the above categories and exceed a specific methane threshold (thresholds vary by facility type) will have to pay $900 per metric ton of methane starting in 2024.

The Congressional Budget Office estimates, based on 2019 data, that the new fees will raise $1.1 billion in fiscal year 2026, and almost $1.9 billion by fiscal 2028. CBO projects revenues will decrease after that as facilities implement methane reduction strategies.

Methane is the primary component of natural gas, and the EPA reports that methane emissions accounted for 11 percent of total U.S. GHG emissions in 2020. Carbon dioxide (CO2) accounted for 79 percent.

However, methane is considered more “potent” than CO2, with some experts putting its “climate change impact” at 25 to 72 times greater than the equivalent mass of CO2. Consequently, reducing methane emissions is “one of the best opportunities for reducing near term [global] warming,” CRS says.

Further, Biden made it clear that by 2030, he wants GHG emissions reduced by 40 percent compared to 2005 levels; reduction levels of that amount require significant transformation.

The IRA’s passage and its implementation of a methane charge put Biden’s goals within reach.

Indeed, the Department of Energy reports that because of the IRA, the United States will not only meet the 40 percent reduction goal but exceed it, as it now projects GHG emissions at 50 to 52 percent below 2005 levels.

According to the EPA, the primary source of methane emissions isn’t natural gas or oil—it’s livestock.