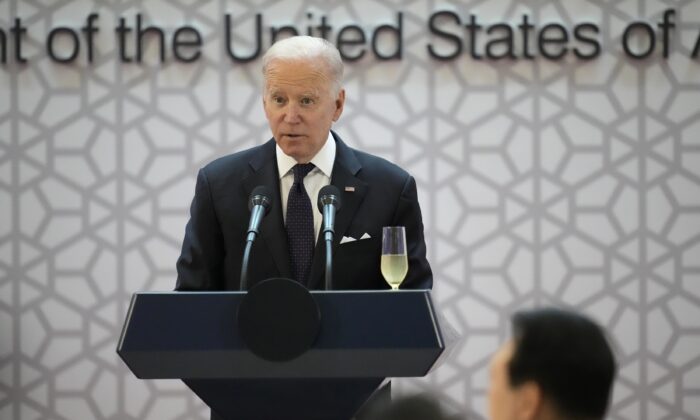 When asked during a news conference in Tokyo whether such measures are needed, Biden said, “No, I don’t think so,” and added: “Thus far, it doesn’t seem to be a need for any kind of extra efforts beyond what’s going on.”

Last week, Belgium became perhaps the first country to issue a mandatory quarantine for individuals who contracted the virus, which is reported yearly in certain African countries but rarely anywhere else. Those officials told local media that those who are confirmed to have monkeypox should self-isolate for 21 days.

The World Health Organization on May 19 confirmed it was stepping up efforts to understand and combat the rare virus.

Health officials in the United Kingdom and other countries, meanwhile, have suggested that homosexual males are at a greater risk of contracting and spreading monkeypox. Reports have said that outbreaks of the virus have been linked to an adult sauna in Madrid, Spain, as well as a “large-scale fetish festival” in Antwerp, Belgium.

“I just don’t think it rises to the level of the kind of concern that existed with COVID-19, and the smallpox vaccine works for it. But, I think people should be careful,” Biden said Monday.

Although monkeypox is related to smallpox, officials have said it is far less deadly. Smallpox pandemics have killed perhaps tens of millions of people throughout human history.

“We have had this monkeypox in large numbers in the past. We have vaccines to take care of it,” Biden also said. It’s not clear what he meant with the “large numbers” comment as monkeypox is considered a rare virus.

Biden’s statements Monday come in contrast to remarks he made a day earlier, when he told reporters that people should be worried about the spread of the virus.

“They haven’t told me the level of exposure yet, but it is something that everybody should be concerned about,” he said Sunday. “We’re working on it hard to figure out what we do and what vaccine, if any, might be available for it. It is a concern in that if it were to spread it would be consequential. That’s all they told me.”

Dr. Ashish Jha, the White House COVID-19 response coordinator, told ABC Sunday that he believes the United States will see “a few more” cases of the rare virus in the near future.

“But I feel like this is a virus we understand, we have vaccines against it, we have treatments against it, and it’s spread very differently than SARS-CoV-2,” he told ABC, using another name for the CCP (Chinese Communist Party) virus that causes COVID-19.