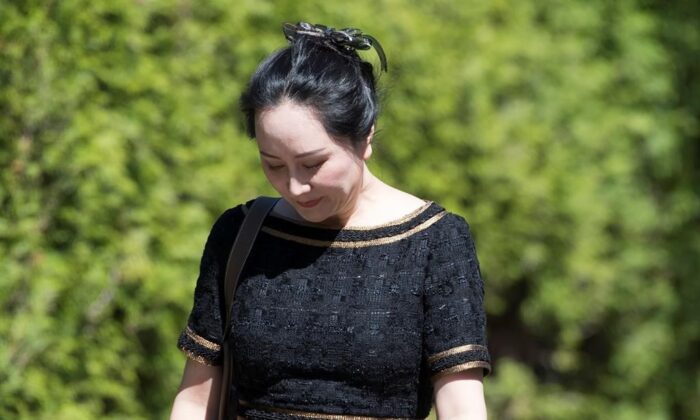 Meng Wanzhou, chief financial officer of Huawei, leaves her home to go to B.C. Supreme Court in Vancouver on May 27, 2020. The legal team for a Huawei executive facing extradition to the United States has lost its battle to have the contents of six confidential documents released to them. Meng Wanzhou's defence team argued in Federal Court that the redacted documents would support its position that Meng suffered an abuse of process during her arrest at Vancouver's airport in 2018. (Jonathan Hayward/The Canadian Press)
Canada

OTTAWA—The legal team for a Huawei executive facing extradition to the United States has lost its battle to have the contents of six confidential documents released to them.

Meng Wanzhou’s defence team argued in Federal Court that the redacted documents would support its position that Meng suffered an abuse of process during her arrest at Vancouver’s airport in 2018.

Meng is wanted in the United States on fraud charges, which she and Huawei deny.

In a ruling dated Aug. 21 but released on Tuesday, Justice Catherine Kane says the court found the information contained in the documents is not relevant to the allegations of abuse described by Meng’s legal team.

She says the attorney general of Canada and a friend of the court submitted a joint proposal that included the lifting of some redactions, but they agreed disclosing the remainder would hurt national security or international relations.

The six documents in question include situational reports by the Canadian Security Intelligence Service, an email reporting information provided by the U.S. Federal Bureau of Investigations, handwritten notes and operational notes.

“The information does not provide the ‘missing pieces of the puzzle’ Ms. Meng seeks,” Kane writes.

Meng is accused of misrepresenting Huawei’s relationship with Skycom in a Powerpoint presentation to HSBC, allegedly putting the bank at risk of violating U.S. sanctions against Iran.

A B.C. Supreme Court judge has already dismissed the first phase of her legal team’s arguments that the allegations would not be considered a crime in Canada, ordering instead for the proceedings to continue.

Meng’s team will argue in an upcoming phase of hearings that her charter rights were violated when she was detained and questioned by border officials for three hours before being informed of her arrest.

They allege Canadian and American officials engaged in a planned scheme whereby the Canada Border Services Agency used or exceeded its powers to compel evidence that would be provided to the RCMP and subsequently to the FBI.

The attorney general had already provided Meng about 1,200 pages of documents relating to the case.

The attorney general and the friend of the court proposed lifting specific redactions and replacing other redactions with alternate wording. The friend of the court is a lawyer with security clearance who was appointed to view the documents and advise Meng’s team on whether any were worthy of dispute, but he was not allowed to share their contents.

The newly released information includes a sentence saying the FBI requested the RCMP monitor Meng should she be released on bail and a response that RCMP would not be able to afford coverage on a 24/7 basis. Another contains notes pertaining to Meng’s travel companion and subordinate Ji Hui, president of Huawei’s financial department, who was released.

After reviewing the confidential documents, Kane found they did not contain information relevant to the abuse of process allegations beyond the additional disclosures.

“The redacted information does not respond to or illuminate the allegations of abuse of process and is not the type of information that counsel for Ms. Meng noted would be relevant,” the decision says.

“If any of the redacted information were marginally relevant—which it is not—the court would find that its disclosure would be injurious.”

In a statement, Foreign Affairs said Champagne reiterated Canada’s calls for China to immediately release two Canadians whose detention is widely seen as an apparent retaliation for Meng’s arrest.

Michael Kovrig and Michael Spavor were charged with spying in June.

“Canada continues to call for immediate consular access to Mr. Kovrig and Mr. Spavor. China’s actions are in violation of the Vienna Convention on Consular Relations,” the statement said.