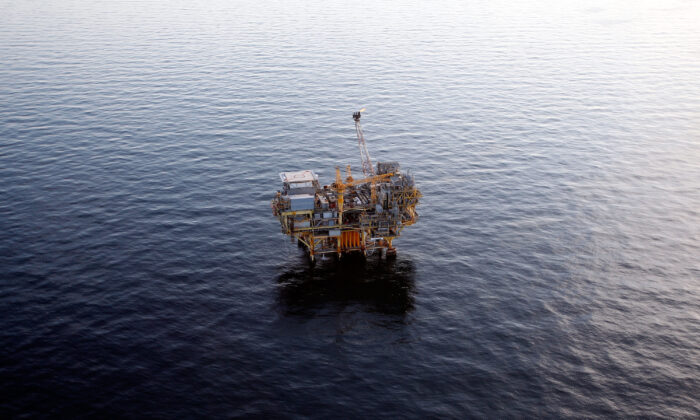 An oil rig near the Deepwater Horizon wellhead in the Gulf of Mexico near New Orleans, on April 28, 2010. (Chris Graythen/Getty Images)
Energy

A federal appeals court in Washington on Aug. 30 partly reversed a lower court’s decision that had found that two 2018 Gulf of Mexico oil and gas lease sales by the U.S. Interior Department to energy companies were valid.

The D.C. Circuit Court of Appeals rejected two arguments by environmental groups, although it agreed the agency had “sidestepped” a report that contained “some evidence” that asserted potential risks.

The appeals court upheld the lower court’s finding that the Interior Department “adequately considered the option of not leasing” and also “reasonably refused to consider potential future regulatory changes.”

“Given the one shortcoming we have identified, we remand without vacatur,” Judge Gregory C. Katsas, a Trump appointee, wrote in the ruling (pdf).

Because the decision didn’t vacate the sales, companies can continue work on production plans they have for the tracts. It does send the lease sales back to the Interior Department for reconsideration and possible mitigation measures and limits on drilling.

The legal saga emerged over the lease sales of 150 million acres in the Gulf of Mexico for oil exploration. The D.C. district court ruled in April 2020 that the sales were valid, prompting environmental groups to appeal the ruling.

Environmental groups argued the lease sales weren’t properly analyzed for risks to people, wildlife, and the environment under the National Environmental Policy Act.

According to the ruling, BOEM “did not consider” whether BSEE’s inspection work was as “rigorous” as the agency noted in its analysis.

Evidence of deficiencies in BSEE’s work was asserted in a report by the Government Accountability Office (GAO), which faulted the agency for maintaining “outdated policies and procedures” and failing to develop “criteria to guide how it uses enforcement tools,” according to the ruling.

The ruling noted that BOEM promised to address the “asserted deficiencies” in the report but later reneged, “telling commenters that the issues were outside the scope of the [environmental impact statements] at that stage.”

“Here, BOEM sidestepped the GAO report and offered only unelaborated statements that BSEE’s enforcement was ‘rigorous.’ In the circumstances here, that was not good enough,” the ruling stated.

The lease sales were made during the Trump administration as part of a 2017 five-year energy plan.