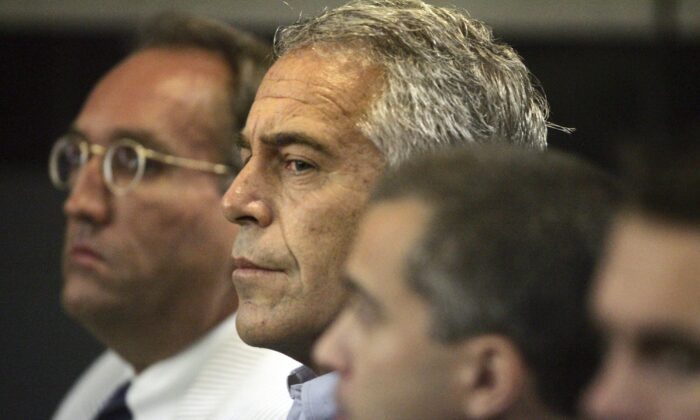 A 2009 settlement agreement between the late disgraced financier Jeffrey Epstein and his long-time accuser Virginia Giuffre, formerly known as Virginia Roberts, was made public on Monday.

The settlement, disclosed by a New York court, shows that Epstein, a convicted sex offender, paid Giuffre $500,000 “and other valuable consideration” to end the lawsuit without any admission of liability or fault.

Filed as Jane Doe No. 102 vs. Jeffrey Epstein (pdf), the settlement served to resolve Giuffre’s allegations that Epstein had hired her as a teenager and pressured her into having sex with numerous rich or notable men, including Britain’s Prince Andrew.

Monday’s now-public document was unsealed as part of Giuffre’s separate 2021 civil lawsuit against Prince Andrew, in which she alleges that he sexually abused her on three occasions between 2001 and 2002, including once at Epstein’s New York City mansion, where he forced her “to engage in sex acts against her will.”

The Duke of York has denied all allegations against him and told the BBC in 2019 that he had “no recollection” of ever meeting Giuffre, despite photographic evidence to the contrary.

However, the settlement says it serves to “remise, release, acquit, satisfy, and forever discharge the said Second Parties and any other person or entity who could have been included as a potential defendant (“Other Potential Defendants”) from all, and all manner of, action and actions of Virginia Roberts, including State or Federal, cause and causes of action (common law or statutory), suits, debts, dues, sums of money, accounts, reckonings, bonds, bills.”

Attorneys for Prince Andrew, who stepped away from royal duties in November 2019, have claimed the settlement would invalidate Giuffre’s lawsuit against him. A hearing into Andrew’s motion to dismiss the civil lawsuit is scheduled for Tuesday.

“Because Prince Andrew is a senior member of the British royal family, he falls into one of the expressly identified categories of persons, i.e., royalty, released from liability under the Release Agreement, along with politicians, academicians, businessmen, and others allegedly associated with Epstein,” Andrew’s attorneys wrote (pdf).

But Giuffre’s lawyer David Boies said in a statement on Monday that the language about protecting potential defendants in the 2009 settlement was “irrelevant.”

“The release does not mention Prince Andrew. He did not even know about it,” Boies said. “He could not have been a ‘potential defendant’ in the settled case against Jeffrey Epstein both because he was not subject to jurisdiction in Florida and because the Florida case involved federal claims to which he was not a part. The actual parties to the release have made clear that Prince Andrew was not covered by it.”

“Lastly, the reason we sought to have the release made public was to refute the claims being made about it by Prince Andrew’s PR campaign,” Boies said.

Andrew B. Brettler, the duke’s lead lawyer, has challenged the civil lawsuit on multiple grounds and called Giuffre’s claims against the Prince “baseless.”

“Epstein negotiated for this broad release, insisting that it cover any and all persons who Giuffre identified as potential targets of future lawsuits, regardless of the merit—or lack thereof—to any such claims,” he said of the 2009 Epstein settlement, the BBC reported. “Giuffre’s baseless claims against Prince Andrew … must be dismissed at this stage,” Brettler said.

The Epoch Times has contacted lawyers for Andrew for comment.

U.S. District Judge Lewis Kaplan will now determine whether the language used in the 2009 settlement means Giuffre can or cannot sue Prince Andrew.

Epstein was found hanged at age 66 in August 2019 in a Manhattan jail, while awaiting trial on sex trafficking charges for abusing women and girls in Manhattan and Florida from 2002 to 2005. He had pleaded not guilty.