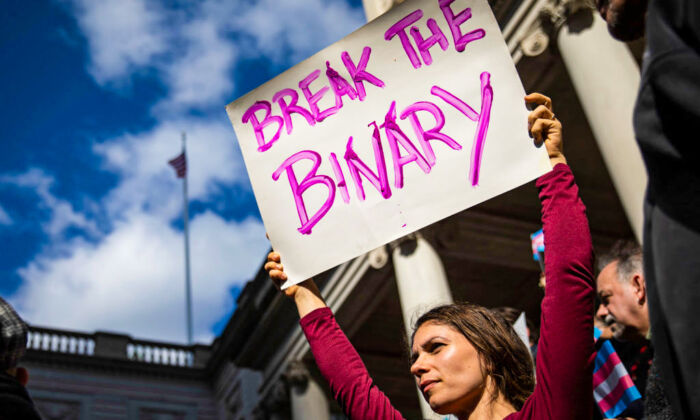 Activists rally to support transgenders on the steps of the City Hall in New York, on Oct. 24, 2018. (Drew Angerer/Getty Images)
Judiciary

A federal judge has blocked a second state from banning puberty blockers, other gender-changing drugs, and surgeries for minors.

After being passed into law by a 66–28 vote, the Alabama Vulnerable Child Compassion and Protection Act went into effect on May 7.

It is now the subject of a pending lawsuit filed by a windfall of opposition including several LGBTQ+ organizations, pediatricians, the ACLU, a minister, and parents of alleged transgender children including a 13-year-old girl who has identified as a boy nearly since she was a toddler.

Carmarion Anderson-Harvey, director of the Human Rights Campaign in Alabama called the measure “the most anti-transgender legislative package ever passed.”

“The act ignores established medical science finding that transgender minors who do not receive this essential medical care suffer serious injuries to their physical and mental health,” the 35-page lawsuit challenging the law claims.

Support for the ban, however, is also widespread.

In addition to Alabama Gov. Kay Ivey—a staunch supporter of the ban—attorney generals from 17 states filed briefs in the lawsuit in support of the law.

“We will continue fighting to protect Alabama’s children from these radical, unproven, life-altering drugs, despite this temporary legal roadblock,” said Ivey in a statement released to The Epoch Times. “We will continue to uphold our duty to ensure that children are free to grow up into the adults God intended them to be, even with today’s societal pressures and modern culture.”

Becky Gerritson, executive director of Eagle Forum Alabama a parents group that fought for the passage of the state law, told The Epoch Times that her organization considers it not only criminal to give children the type of drugs being used to turn them into another gender, but beyond “all comprehension.”

“These are the same exact drugs being used to chemically castrate convicted pedophiles,” she said, “if that’s not highly disturbing then I don’t know what is.”

Gerritson said an administrator from the University of Alabama Gender Clinic in Birmingham, which has publicly censured the Alabama law, also admitted at a previous legislative hearing that they were administering gender-affirming therapy to children as young as 3 years.

The clinic hung up on The Epoch Times when it tried to confirm Gerritson’s claim.

As with the Alabama law, the Arkansas law also places the restriction on physicians from prescribing puberty blockers to minors and performing gender-altering surgery on them.

There is also a lawsuit pending against the Arkansas law.

Holly Dickson, executive director of the Arkansas ACLU, said in a statement that the favorable rulings from the courts “sends a clear message to states across the country that gender-affirming care is lifesaving care.”

“We won’t let politicians in Arkansas—or anywhere else—take it away,” she added.

Under both the now-blocked Alabama and Arkansas laws, physicians could be charged with a felony and even face jail time for prescribing puberty blockers to kids.

In Alabama, the penalties include a maximum of 10 years imprisonment or a fine of $15,000.

Gerritson sees puberty blockers as part of what she called a rapidly growing “grooming network”  of younger and younger kids by the “transgender industry.”

She believes adolescent children are also being sold on puberty blockers as a way to avoid the natural, but painful process of puberty.

“It’s important for children to know that going through puberty is hard for everyone, but taking hormones to block what your body wants to do naturally is not the solution.”

The parents of the 13-year transgender child involved in the Alabama lawsuit said when they resisted their daughter’s insistence she was a boy, she became reclusive, had “frequent emotional outbursts, and “would slam her head into the wall.”

The lawsuit states her moods improved when the Baptist couple took their daughter to a therapist who diagnosed her with gender dysphoria.

Gerritson said she does believe that some children do genuinely suffer from gender dysphoria, but not at the rate the world is seeing.