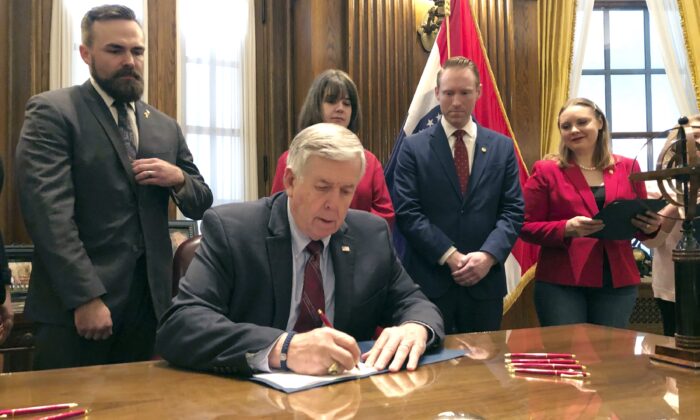 A federal court ruled against a Missouri law on June 9 that would ban most abortions from being performed in the state.

Three judges on the U.S. Court of Appeals for the 8th Circuit upheld a lower court’s 2019 decision to grant a preliminary injunction, making state officials unable to enforce the law.

“Missouri has failed to demonstrate that its policy priorities outweigh (1) the public interest in access to pre-viability abortions, or (2) the significant interference with RHS’s business and the harm to pregnant individuals who might seek a pre-viability abortion before final judgment in this case,” the panel said.

The law in question would bar women from terminating pregnancies at eight weeks or later, and prevent women from aborting an unborn baby because of the detection of Down syndrome. It would also open up physicians who performed abortions after eight weeks to time in prison.

U.S. District Judge Howard Sachs, a Jimmy Carter appointee, paused the law two years ago as a legal battle over it played out, saying that Reproductive Health Services of Planned Parenthood of the St. Louis Region, or RHS, would likely succeed in its lawsuit against the law.

The state appealed, arguing the decision was the wrong one.

That led to the panel ruling on June 9.

“We find no error in the district court’s conclusion that the balance of the equities favors injunctive relief,” the panel wrote.

Stras concurred with the judgment in part, but dissented in part. He argued that the court relaxed its rules to let RHS have a preliminary injunction despite the clinic’s “failure to show a ‘threat of irreparable harm’ from Missouri’s Down Syndrome Provision.”

Yamelsie Rodriguez, president and CEO of RHS, called the ruling “a critical victory for Missourians.”

“At a time when Gov. [Mike] Parson and anti-abortion politicians continue their relentless attacks on reproductive health care, our rights often come down to one court decision at a time,” Rodriguez said in a statement. “For now, we celebrate our continued ability to provide safe, legal abortion at the last remaining clinic in Missouri.”

Missouri Attorney General Eric Schmitt, a Republican, told news outlets in a statement that he will appeal to the Supreme Court.

“My son Stephen has shown me the inherent beauty and dignity in all life, especially those with special needs,” Schmitt said. “While we’re disappointed in the Eighth Circuit’s decision, their decision does provide an avenue for this case to be heard by the Supreme Court, and we plan to seek review in the Supreme Court. I have never and will never stop fighting to ensure that all life is protected.”