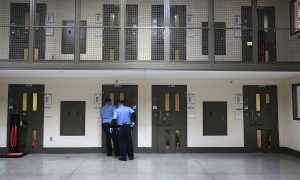 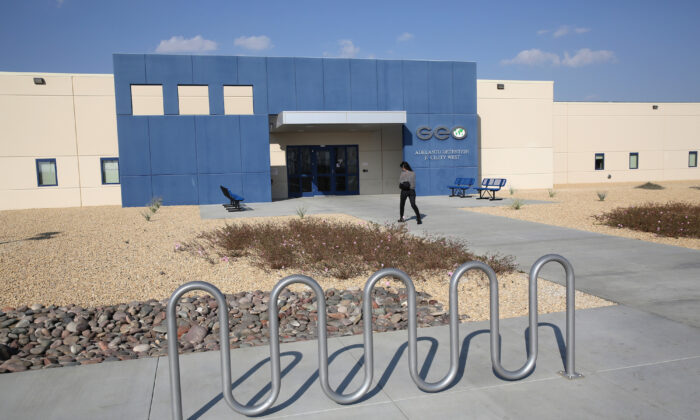 A family member walks into the Adelanto Detention Facility, in Adelanto, Calif., on Nov. 15, 2013. (John Moore/Getty Images)
US News

The California law “impeded the federal government’s immigration policy,” a panel of the 9th U.S. Circuit Court of Appeals said in its majority ruling granting a preliminary injunction and overturning a lower court’s decision.

The law in question, Assembly Bill No. 32, bars the California Department of Corrections and Rehabilitation from entering into or renewing a contract with private, for-profit prisons to incarcerate inmates. It also states that after Jan. 1, 2028, no state prison inmates can be imprisoned in a private facility, and it bars, with limited exceptions, the operation of any private detention facility within the state.

The Democrat-controlled California Legislature passed the bill in 2019, and Gov. Gavin Newsom, a Democrat, signed it into law later that year.

“During my inaugural address, I vowed to end private prisons, because they contribute to over-incarceration, including those that incarcerate California inmates and those that detain immigrants and asylum seekers,” Newsom said in a statement at the time. “These for-profit prisons do not reflect our values.”

But Geo Group, a private prison operator, and the U.S. Department of Justice sued over the law, alleging it infringed on federal jurisdiction.

“The unlawful effect of AB-32 is to undermine and eliminate the congressionally funded and approved enforcement of federal criminal and immigration law by” immigration enforcement agencies, one of the suits stated. They were consolidated into one docket last year.

Two judges on the appeals court panel agreed, noting that laws Congress passed give the secretary of Homeland Security broad discretion over immigrant detention, including enabling contracts with private companies to operate prisons or other detention facilities.

“AB 32 cannot stand because it conflicts with this federal power and discretion given to the Secretary in an area that remains in the exclusive realm of the federal government,” Circuit Judge Kenneth Lee wrote in an opinion joined by Judge Bridget Bade. “It bars the Secretary from doing what federal immigration law explicitly permits him or her to do.”

Lee and Bade were both appointed by then-President Donald Trump.

Circuit Judge Mary Murguia, an Obama appointee and the third judge on the panel, dissented.

She argued that while Congress “has not prevented private immigration detention,” it also hadn’t “clearly authorized such detention.” The law also doesn’t mention that the federal government and its provisions are within a state’s purview, she alleged.

The Department of Justice declined to comment on the ruling, and Geo Group didn’t respond to an inquiry.

California Attorney General Rob Bonta, who as a Democrat state representative authored the bill in question, said in a statement that he would keep battling over the law.

“When we passed AB 32, we sent a clear message that putting an end to for-profit detention centers is key to achieving that goal. Prisons and detention centers shouldn’t be places of profit,” he said. “We will continue the fight to ensure the dignities and rights of everyone in California are protected. As a Filipino American who was brought to this country as an infant, this fight is personal to me. While the road ahead may feel a little longer today, our work continues and we will keep pushing forward.”