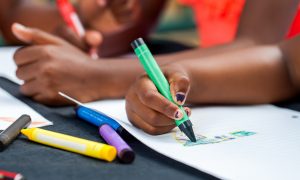 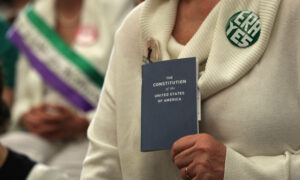 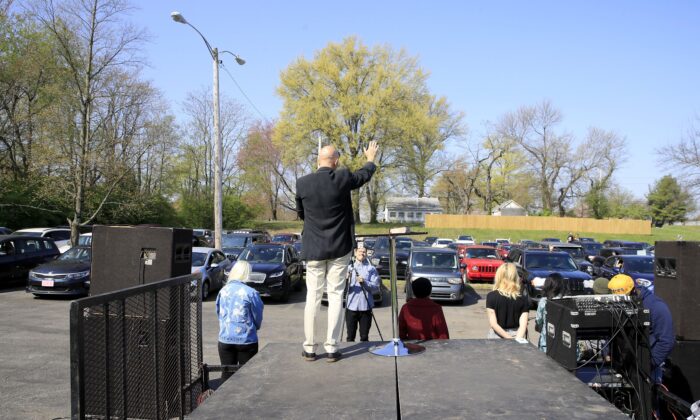 Pastor Chuck Salvo delivers his sermon to the congregation during a drive-in service at On Fire Christian Church in Louisville, Ky., on April 5, 2020. (Andy Lyons/Getty Images)
AMERICA

A federal judge has allowed California to enforce its ban on in-person religious services in the interest of public health amid the CCP virus pandemic.

Judge John Mendez of the U.S. District Court for the Eastern District of California on Tuesday denied Cross Culture Christian Center’s request for relief from state and county stay-at-home orders that require residents to remain in their places of residence and prohibit gatherings deemed non-essential.

Earlier this year, the church filed a lawsuit against California Gov. Gavin Newsom, as well as county and city officials to challenge the orders, alleging that they infringe on the congregants’ constitutional and statutory rights to speak, assemble, and practice their religion as they wish.

This came after Pastor Jonathan Duncan and the church received warnings that it was in violation of the orders after Duncan continued to assemble with congregants. In late March, police officers posted a notice on the building explaining that their “non-essential” use of the facility was a public nuisance. Local officials also warned the church’s landlord that they would face penalties if they continued to let their tenant use the building.

Duncan returned to Cross Culture Christian Center on April 5 to find that his landlord had changed the locks.

In the complaint, the church asked the court to block enforcement of the orders as long as Cross Culture Christian complies with the Centers for Disease Control and Prevention’s social-distancing guidelines while conducting the services.

“Even in times of health, government officials must often strike the delicate balance between ensuring public safety and preserving the Constitution’s fundamental guarantees. The judiciary plays an important role in ensuring that balance is permissibly struck,” Mendez wrote.

“During public health crises, new considerations come to bear, and government officials must ask whether even fundamental rights must give way to a deeper need to control the spread of infectious disease and protect the lives of society’s most vulnerable.

“Under these rare conditions, the judiciary must afford more deference to officials’ informed efforts to advance public health—even when those measures encroach on otherwise protected conduct; even when thoughtful minds could disagree about how to best balance the scales,” he added.

Duncan told the Associated Press in a statement that he was disappointed by the ruling but will continue to fight for the right to worship.

“It is time for pastors and religious leaders across the state to rise up and start pushing back against these draconian stay-at-home orders that completely fail to take into account the true essentiality of religion in our society,” he said in the statement.

This comes at a time when many local and state officials across the country have taken action to stop people of faith from gathering, in an effort to slow the spread of the CCP virus pandemic. This has fueled tension between political and religious leaders as they attempt to navigate the uncertainties of how to operate during the pandemic.

Attorney General William Barr, who has been vocal about ensuring that lockdown measures do not violate the constitutional rights and civil liberties of Americans, had previously issued a memorandum directing federal prosecutors to “be on the lookout” for state and local restrictions that could be running afoul of the Constitution.

In his memo, Barr said that in the event an ordinance “crosses the line” between attempts to stop the spread of the virus and violating constitutional and statutory protections, the DOJ “may have an obligation to address that overreach in federal court.”

“Many policies that would be unthinkable in regular times have become commonplace in recent weeks, and we do not want to unduly interfere with the important efforts of state and local officials to protect the public,” Barr said. “But the Constitution is not suspended in times of crisis.”