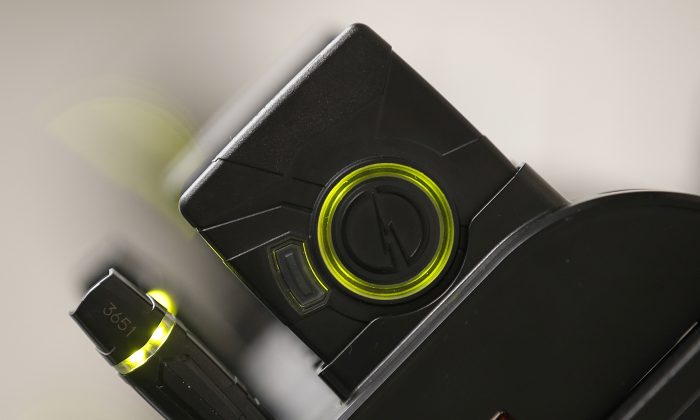 LAS VEGAS—A former Las Vegas police officer seen via body-camera video in a bloody confrontation while arresting a woman last year has now been indicted on federal charges, accused of a civil rights violation and lying about his use of force.

The U.S. Justice Department on Tuesday said that a federal grand jury in Nevada indicted Richard Thomas Scavone on charges that he violated the woman’s civil rights by using excessive force and for obstruction of justice for falsifying the police report where he claimed she was resisting arrest.

Scavone was put on paid leave shortly after the Jan. 6 incident. Scavone was then terminated from the department on Sept. 10, Officer Michael Rodriguez, a spokesman for the Vegas police.

The Clark County District Attorney initially filed a misdemeanor battery charge against him in March. But Scavone’s defense attorney, Josh Tomsheck, said he expects the District Attorney’s case to be dismissed at the next status hearing on Jan. 20, the same day Scavone will appear in federal court.

“Our position is the charges and federal indictment don’t match the facts in the case and that Mr. Scavone is looking forward to rigorously defending himself,” Tomsheck said.

The incident happened last year on the morning of Jan. 6, when the woman was initially stopped on suspicion of prostitution outside of a hotel one block west of the Las Vegas Strip. After a scuffle that left her face bleeding, she was arrested for loitering for the purpose of prostitution, littering and resisting a police officer.

Scavone had said on the initial arrest report that the woman was combative and pulling away from his grip. The officer also said that she was reaching around her bra area, which threatened his safety.

But a detective who investigated the woman’s complaint of excessive force reported inconsistencies between Scavone’s version of the events and what the body-camera video showed. According to the detective’s March 12 report, the woman was put in handcuffs within a minute of the officer getting out of his vehicle. She was then seen on video being thrown to the ground, grabbed by the neck and slammed by her head on the hood of the patrol car three times.

Richard Scavone was caught on video handcuffing the woman before grabbing her around the neck and throwing her to… https://t.co/2F0YQB2I9z

Police have declined to make the video available. But the detective who investigated Scavone reported that the officer made at least four misleading or false statements surrounding his claim that the woman was resisting arrest, used unreasonable and excessive force and didn’t have probable grounds to arrest her. The investigation report also quotes the woman as saying to Scavone: “You’re abusing me for no reason.”

The charges against the woman have since been dropped, as the report said she was not read her Miranda rights when she allegedly admitted to being a prostitute.