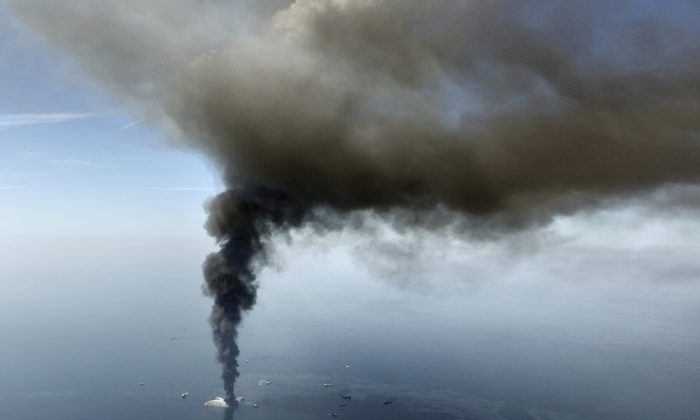 Federal Board Finds Another BP Spill Could Happen

A federal board investigation into the 2010 BP oil spill found that the blowout preventer had multiple problems and had not been tested properly. The spill caused 11 human deaths, 17 severe injuries, and serious environmental damage. Other rigs still use the devices. A catastrophic spill could happen again.

The report issued Thursday by the U.S. Chemical Safety Board (CSB) zeroes in on what went wrong with the blowout preventer, or BOP, blaming bad management and operations. It found faulty wiring in two places, a dead battery, and a bent pipe in the hulking device. And that, it said, led to the dumping of 172 million gallons of oil into the Gulf of Mexico—the nation’s worst offshore oil disaster.

A key technical finding was that a device meant to cut off and seal the well’s drill pipe “actually punctured the buckled, off-center pipe, sending huge additional volumes of oil and gas surging toward the surface and initiating the 87-day-long oil and gas release into the Gulf that defied multiple efforts to bring it under control,” according to the report.

The oil industry followed its own preference—to test the blowout preventer as one piece.

The energy industry’s best safety practices are not strong enough. They remain overly influenced by the industry itself, overly focused on cost and convenience. The way the blowout preventer was tested is a good example of that.

The things the energy industry can ruin don’t belong to it. They belong to everyone. The Gulf of Mexico fishing, tourism, and way of life were not BP’s to damage. Prince William Sound, Alaska, did not belong to Exxon.

“Our investigation has produced several important findings that were not identified in earlier examinations of the blowout preventer failure,” said CSB Investigator Cheryl MacKenzie, who led the investigative team.

I learned from covering the 2010 disaster that the safety culture at BP was chronically sloppy. I also learned that government agencies meant to oversee energy companies are often staffed by people with close ties to the industry. Regulatory agencies hire people from the oil industry. They often give the oil industry a pass.

“Although blowout preventers are just one of the important barriers for avoiding a major offshore accident, the specific findings from the investigation about this BOP’s unreliability illustrate how the current system of regulations and standards can be improved to make offshore operations safer,” MacKenzie said.

“Ultimately the barriers against a blowout or other offshore disaster include not only equipment like the BOP, but also operational and organizational factors,” she said. “And all of these need to be rigorously defined, actively monitored, and verified through an effective management system if safety is to be assured.”

The CSB released its draft report and held a public meeting in Houston Thursday, asking for public comments.

CSB Chairman Rafael Moure-Eraso said, “Drilling continues to extend to new depths, and operations in increasingly challenging environments, such as the Arctic, are being planned. … To maintain a leadership position, the U.S. should adopt rigorous management methods that go beyond current industry best practices.”

The two-volume report goes into detail analyzing what happened and why it happened. It took this long to gather all the information.

I hope it won’t take as long for the energy industry to change its safety practices.