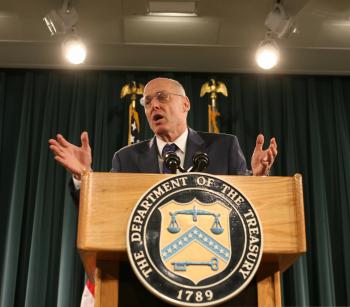 $700 Billion Federal Bailout in the Works

The proposal, if approved by Congress, would become the most sweeping action our government has taken on the financial markets since the Great Depression, and the biggest governmental intervention of the free markets this country has ever seen.

Under the plan, the U.S. Treasury can buy mortgage-related assets from any financial institution. The Treasury will appoint money managers to oversee the assets and sell them at will, giving Sec. Paulson unprecedented authority over the financial markets without court approval and little Congressional oversight.

House and Senate banking committees are briefed in semiannual reports issued by the Treasury Department.

The comprehensive action by the federal government follows the Federal Reserve’s bailout of Bear Stearns and American International Group, and the Treasury Department’s acquisition of mortgage finance firms Fannie Mae and Freddie Mac. With more financial firms potentially in peril, the federal government was forced to take more aggressive and broader action against a credit freeze threatening to cripple the U.S. financial markets.

“The underlying weakness in our financial system today is the illiquid mortgage assets that have lost value as the housing correction has proceeded,” Treasury Secretary Hank Paulson said in the statement on Saturday. “These illiquid assets are choking off the flow of credit that is so vitally important to our economy.”

Sen. Chris Dodd (D-Conn.) said on ABC’s Good Morning America that Congressional leaders were told, “that we’re literally maybe days away from a complete meltdown of our financial system, with all the implications, here at home and globally.” The Treasury plan aims to halt what was becoming a market crisis.

The federal plan allows the U.S. Treasury to purchase home loans, mortgage-backed securities, commercial and residential related assets, and other assets as deemed necessary, according to a statement by the Treasury.

“The taxpayer is at risk,” he said. “It would be extraordinary circumstances, highly unlikely, that the cost will be anything like the amount you spend for the assets.”

“Democrats will work with the Administration to ensure that our response to events in the financial markets is swift,” U.S. House Speaker Nancy Pelosi said in a statement. “But we must insulate Main Street from Wall Street and keep people in their homes by reducing mortgage foreclosures.”

A: The $700 billion comes from taxpayers’ pockets. However, the federal government estimates that the amount needed to keep the credit market afloat is somewhere between $500 billion and $1 trillion. The amount of money needed should be lower, as the government is hoping to re-sell the assets to investors and unwind the positions if possible. The $700 billion figure is the maximum amount allowed by the proposed plan.

Q: Does the figure include the money need to bail out AIG, Fannie, and Freddie?
A: No. The $700 billion is on top of the amount the federal government already committed in recent bailouts—$80 billion for AIG, $29 billion for Bear Stearns, and an estimated $25 billion for Fannie Mae and Freddie Mac.

Q: What is AIG, and why did the government decide to bail out the firm?
A: AIG stands for American International Group. It is the largest insurance company in the United States. Last week, the Treasury Department maintained that it did not want to spend any public money for a bailout of AIG. When negotiations between private banks failed to come up with the amount necessary to keep AIG afloat, the Treasury was forced to step in.

AIG has 74 million customers and many policyholders who were affected by Hurricane Ike. In addition, AIG is a top underwriter of protection on mortgage-backed securities, which means that if the company filed for bankruptcy, there would be another round of write-downs at banks around the world. The U.S. government decided that if it let AIG fail, the consequences would be too severe.

Q: What is Lehman Brothers, and why did the government decide NOT to bail it out?
A: Lehman Brothers is the fourth-largest securities firm in the United States. After the near collapse of Bear Stearns, the Federal Reserve Bank assigned staff to every major investment bank to monitor its risks, strategy, and liquidity in the event of an emergency. Also, after the events in March, the Fed opened up its lending window to allow brokerages unlimited access to short term funding, which solves liquidity problems encountered by Bear Stearns. So it is highly improbable that the Fed did not foresee Lehman’s troubles brewing.

The Fed sponsored negotiations with the executives of major banks to help find a solution to rescue Lehman. Many investment banks, hedge funds, and mutual funds convened the day before Lehman’s announced bankruptcy to quantify the potential losses due to a Lehman collapse. In the end, after private talks failed, the Fed decided that a Lehman failure is something it—and the markets—could cope with.