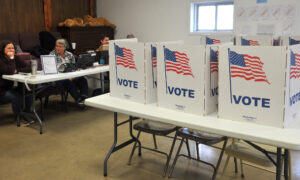 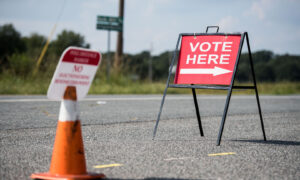 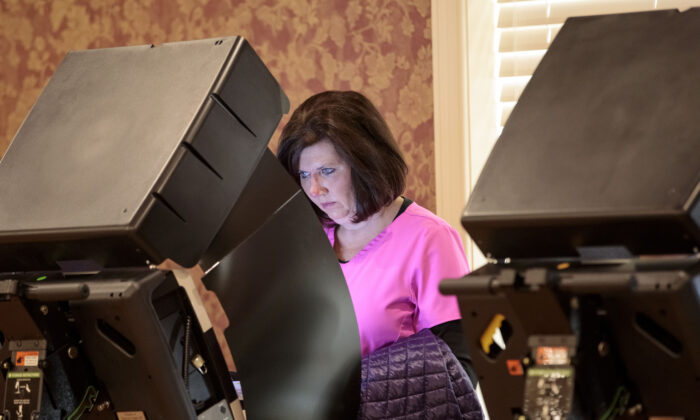 A voter casts a ballot at Shawnee Town Hall in Shawnee, Kansas, on Nov. 6, 2018. (Whitney Curtis/Getty Images)
US News

A federal appeals court has determined that Kansas can’t make voters produce proof of citizenship when they register to vote, marking a setback in efforts by largely conservative activists to safeguard integrity in the electoral process.

In a case cited as Fish v. Schwab, a panel of the Salt Lake City-based 10th Circuit Court of Appeals decided April 29 to uphold a June 18, 2018, ruling by U.S. District Judge Julie A. Robinson, who was appointed in 2001 by President George W. Bush. The appeals court decision affects other states such as Oklahoma, New Mexico, Colorado, Wyoming, and Utah that are within the geographical boundaries of the circuit.

In 2011, the Kansas legislature approved the Secure and Fair Elections (SAFE) Act, which introduced a requirement that the state’s residents present documentary proof of citizenship when applying to register to vote. The plaintiffs challenged the statute as it applied to “motor voter” applicants, which refers to individuals applying to register to vote at the same time they apply for or renew their driver’s license online or at a Division of Motor Vehicles office. They claimed it placed undue burdens on would-be registrants and in the process infringed on their constitutional rights.

Activist groups largely on the left claimed the documentary proof-of-citizenship statute inflicted damage on voter rolls, deprived tens of thousands of individuals of the vote, and undermined confidence in Kansas elections.

The 10th Circuit found the SAFE Act that was signed into law by then-Gov. Sam Brownback, a Republican whom President Donald Trump later appointed U.S. Ambassador at Large for International Religious Freedom, ran afoul of the U.S. Constitution’s Equal Protection Clause and the National Voter Registration Act, known popularly as the “motor-voter law.”

Robinson blocked Kansas from enforcing the law in question.

The appeals court last week found that there was a “significant burden quantified by the 31,089 voters who had their registration applications cancelled or suspended” in Kansas, and that the state had failed to “justify the burden imposed on the right to vote.”

Kansas argued it has what lawyers call a “compelling interest” in preventing voter fraud and that its proof-of-citizenship requirement wasn’t a significant burden to voters. The state said the requirement safeguards the integrity of elections and the accuracy of state voter rolls.

While the appeals court said it agreed “in the abstract” that Kansas has a legitimate interest in making sure only the votes of eligible voters are counted, it made it clear it wasn’t convinced there was any justification for imposing a burden on voters. The appeals court stated that the lower court had given the state’s electoral system a clean bill of health.

The appeals court determined that, at most, 67 noncitizens registered or attempted to register in the state in the preceding 19 years.

“Thus we are left with this incredibly slight evidence that Kansas’s interest in counting only the votes of eligible voters is under threat,” the ruling stated. “Indeed, even as to those 39 noncitizens who appear on the Kansas voter rolls, the district court found that ‘administrative anomalies’ could account for the presence of many—or perhaps even most—of them there.”

Former Kansas Secretary of State Kris Kobach, who is now running for a U.S. Senate seat in Kansas as a Republican, defended the SAFE Act, telling The Kansas City Star he disagreed with the appellate court’s decision.

Kobach said the 10th Circuit judges didn’t grasp how the SAFE Act actually worked, and he said it succeeded in preventing noncitizens from voting.

“Some of those individuals were not actually U.S. citizens, so they never should have been registered,” Kobach said. “So for the court to seize on that 30,000 figure shows that the court didn’t actually understand how the law operated.”

The American Civil Liberties Union called on current Kansas Secretary of State Scott Schwab, also a Republican, to not pursue an appeal and “turn the page on Kris Kobach’s sorry legacy of voter suppression.”

Schwab told reporters his office hasn’t yet decided if it will appeal the ruling.