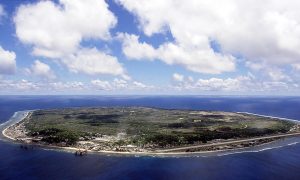 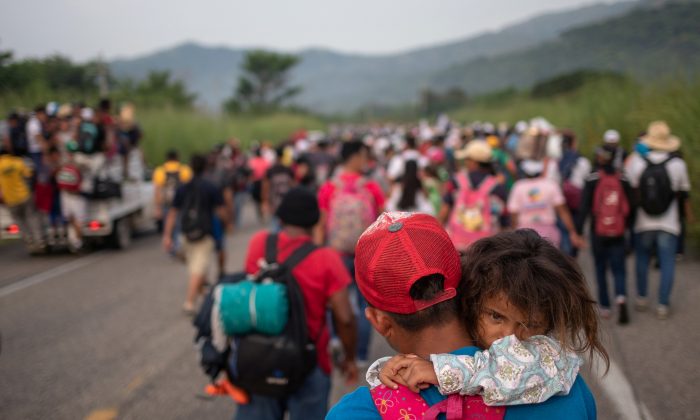 A man from Honduras carries his daughter Allison, 4, as he walks amid a caravan of thousands of migrants from Central America en route to the United States in the outskirts of Arriaga, Mexico, on Oct. 27, 2018. (Adrees Latif/Reuters)
Politics

A federal appeals court has temporarily halted a lower court’s order to stop a Trump administration policy that forces asylum-seekers traveling north into the United States to wait in Mexico while their claims are processed.

A three-judge panel from the 9th U.S. Circuit Court of Appeals temporarily blocked the lower court’s ruling from going into effect.

The policy, known as the Migrant Protection Protocols (MPP), was enacted in Jan. 24, as an attempt to curb the flow of meritless asylum claims and stop thousands of illegal immigrants from being released into the country—never to be seen again.

The MPP was first trialed in at the San Ysidro border crossing between San Diego and Tijuana, Mexico, but has expanded to the points of entry in Calexico, California, and El Paso, Texas, with plans to further extend it to other border crossings as well.

On April 8, San Francisco-based U.S. District Judge Richard Seeborg ordered the policy to be suspended as of April 12 (pdf).

Seeborg, a former President Barack Obama appointee, said in his ruling that the MPP violates U.S. law by failing to evaluate dangers migrants face in Mexico—which attorneys for the civil liberties groups have argued.

They say the policy puts asylum-seekers’ lives at risk by forcing them to wait in Mexico, which is plagued with crimes and violence.

Meanwhile, the government has called the ruling erroneous, arguing that it endangers the public during a humanitarian crisis at the U.S.-Mexico border. It said that it wants the court to keep the policy in place while the lawsuit is litigated. The lawsuit is expected to take months and possibly years. The White House appealed the order on April 10 (pdf).

After the order was issued, immigration officials had stopped returning asylum-seekers to Mexico, according to the plaintiffs’ lawyers.

The Mexico government said that more than 1,300 migrants were returned to Mexico after the program took effect.

In response to the appeals court ruling, President Donald Trump wrote on Twitter on April 12, “Finally, great news at the Border!”

The MPP, which was overseen by former Department of Homeland Security (DHS) Secretary Kirstjen Nielsen, is an “unprecedented” move aimed at addressing the “humanitarian and security crisis at the southern border.”

“This humanitarian approach will help to end the exploitation of our generous immigration laws,” Kirstjen explained back in January when the policy first took effect.

Nielsen said this would allow DHS to more effectively assist legitimate asylum-seekers and individuals fleeing persecution, as migrants with non-meritorious or even fraudulent claims will no longer have an incentive for making the journey.

A further 11,000 presented at ports of entry without documentation and were deemed inadmissible, bringing the March total to 103,000.

“I have never witnessed the conditions we are facing on the southwest border. This is not a manufactured crisis,” said Rodolfo Karisch, chief Border Patrol agent for the Rio Grande Valley sector, at a Senate hearing on April 9.

“On average, we apprehend 1,000 illegal border crossers per day—roughly the capacity of 17 commercial buses.”

Epoch Times Reporter Charlotte Cuthbertson and The Associated Press contributed to this report.