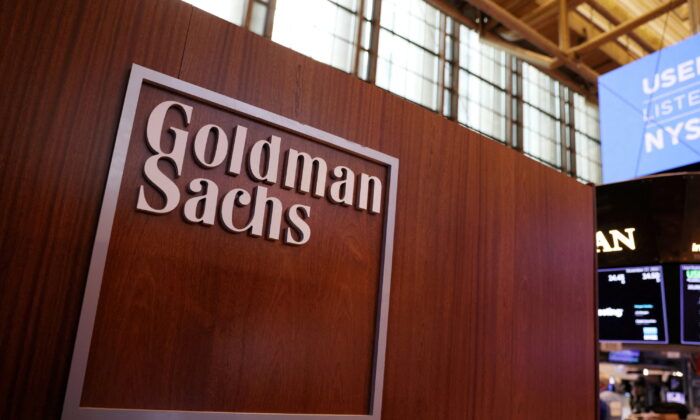 The logo for Goldman Sachs on the trading floor at the New York Stock Exchange (NYSE) in New York on Nov. 17, 2021. (Andrew Kelly/Reuters)
Economy

Fed Will Have to Crush Job Market to Bring Inflation Down to Around 2 Percent: Goldman Economist

A prominent economist for Goldman Sachs has argued in a new interview that the Federal Reserve will have to rein in the lively job market in order to curtail inflation, responding to Friday’s release of payroll reports showing the lowest level of unemployment in over five decades, even as the economy appears to enter an unofficial state of recession.

Jan Hatzius, who serves as chief economist for Goldman Sachs, appeared on Bloomberg’s “Odd Lots” podcast in an episode released on Monday, in which the economist offered remarks about the state of the job market, inflation, and the overall economy, suggesting that the Fed will likely have to make hard sacrifices in order to return inflation rates to the Fed’s preferred target of roughly 2 percent annually.

The Goldman executive was asked whether inflation could return to the vicinity of 2 percent without incurring a severe recession, expressing skepticism about the likelihood of such an outcome while considering an outside possibility of this occurring.

“I think it’s possible, and I do think that there is a path toward something like 2 percent that doesn’t involve a recession,” Hatzius said, “but it’s a very narrow path, and obviously we’ve seen a lot of unanticipated shocks over the last two and a half years. You have to be very humble in your ability to predict what’s going to happen.”

The Goldman economist stressed, however, that the job market must cool down to some extent to see any meaningful progress on the inflation issue.

“We still have close to 11 million open positions and less than six million unemployed workers,” he said. “That’s still a very large gap, basically unprecedented, both in absolute terms and relative to the size of the population in postwar history,” Hatzius continued.

Since the initial outbreak of the COVID-19 virus in the United States, the job market has been one of the most unusual features of the pandemic-era economy. The lockdowns in spring 2020 created a massive spike in unemployment, which peaked at 14.8 percent in April of that year—the highest rate of unemployment since data collection began.

While unemployment remained higher than usual for roughly two years thereafter, rising and falling in tandem with new strains of the virus, the job market saw an incredibly fast recovery from the high of April 2020, returning to pre-pandemic levels last month.

Last Friday, the Department of Labor released payroll information for July, attesting to one of the hottest labor markets ever recorded, even as the economy has charted two consecutive quarters of GDP contraction.

Hatzius, who has served as chief economist for the legacy investment bank since 2011, became particularly prominent after his bearish forecasts for the late 2000s were vindicated by the financial crisis of  2007–08, received the Lawrence R. Klein Award for economic forecasting in both 2009 and 2012, designating him as the “most accurate economist” of those years.

Given Hatzius’ reputation as something of a clairvoyant in the stock markets, it is little wonder that analysts cling on the man’s every word and pay careful heed to his predictions. However, Hatzius’ emphasis is not universal, and other experts have argued that.

“I’m not sure why people think it’s the Fed’s job to hurt employment,” says Ross Gerber, CEO of Gerber Kawasaki, Inc., a wealth and investment management firm. “It’s actually the opposite. Their job is maintain full employment with 2% percent inflation. The battle is with oil prices, not jobs.”

As the Fed’s regimen of rate hikes have begun to take their toll on the overall economy, others have argued that the institution’s measures have been too extreme in its efforts to curtail inflation. Progressives such as former Secretary of Labor Robert Reich have advocated for a looser monetary policy, arguing that rate hikes will have a deleterious effect on the well-being of the working and middle classes.

However, for those of the same mind as Jan Hatzius, there simply is no way forward that allows policymakers to solve inflation without making hard sacrifices in terms of employment and overall growth. As the debate over monetary policy in these unprecedented times continues to rage, many a policymaker at the Fed will sprout a gray hair as they navigate the conflicting goals of maintaining a strong economy while curtailing inflation.