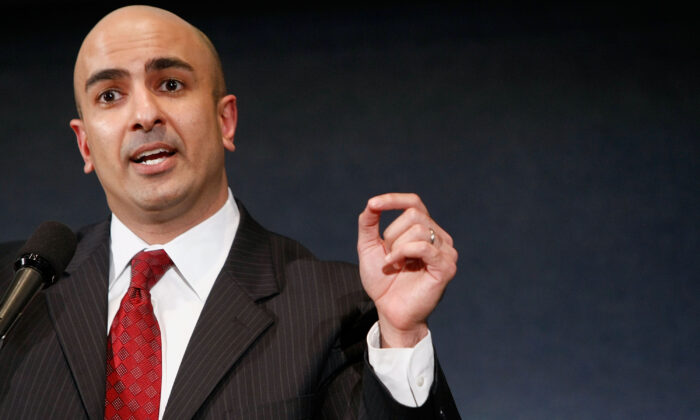 Fed Will Do All It Takes to Tame Inflation: Kashkari

Minneapolis Fed President Neel Kashkari said on Friday that the Federal Reserve will do all it takes to tame surging prices but that he hopes monetary policy screws won’t have to be tightened all that much, with his remarks coming amid mounting recession fears and concerns that aggressive rate hikes might tip the economy into a slowdown.

Kashkari made the remarks on May 13 during a virtual conference co-hosted by the Federal Reserve Banks of Dallas and Minneapolis on the topic of energy and inflation.

“We’re here because inflation is much too high,” Kashkari said, as the latest consumer price index (CPI) numbers showing that the annualized pace of inflation in April came in at 8.3 percent, close to a 40-year high.

The cost of energy is a key driver of inflation, he said, as it feeds into a number of sectors of the economy. Energy prices have risen sharply in recent months, accounting for nearly one-third of the CPI increase over the past year and a half, according to the Minneapolis Fed.

Explaining that surging prices are caused by an imbalance between supply and demand, Kashkari said the Fed’s toolkit is limited to impacting the demand side of the equation, chiefly by hiking rates.

The central bank seeks input from the energy industry on its supply-side efforts, he said, to give policymakers a better sense of where they need to set monetary policy to bring demand in alignment with supply.

“I’m confident that my colleagues and I have the conviction to do what we need to do to bring inflation back down, but I’ll be honest with you, I hope we have to do less,” Kashkari said, apparently in a tacit nod to concerns expressed by a number of economists that hitting the brakes hard could slow the economy sharply.

“And we’ll only be able to do less if more supply comes online,” he added.

Kashkari’s remarks come on the heels of an interview with Fed Chair Jerome Powell that persistent supply chain disruptions and “huge” geopolitical events happening around the globe could foil the Fed’s attempts at engineering a so-called “soft landing” for the U.S. economy, with the central bank chief’s statement amounting to an acknowledgment of the possibility of a recession.

“It’s a very challenging environment to make monetary policy,” Powell told NPR in a recent interview. “Our goal, of course, is to get inflation back down to 2 percent without having the economy go into recession, or, to put it this way, with the labor market remaining fairly strong.”

Powell was asked about a pathway to “this mythical soft landing,” where the policy tightening doesn’t tip the economy into a recession.

Echoing Kashkari’s remarks about the limitation of Fed policy, Powell said the central bank can cool surging demand, which is part of the inflationary puzzle, but that it has no tools to address supply-side factors.

“So the question whether we can execute a soft landing or not, it may actually depend on factors that we don’t control. But we should control the controllable. And what we control is there’s a job to do on demand, demand is out of whack with supply,” he said.

The Fed officials’ remarks come amid signs of a possible economic slowdown, prompting fears that aggressive rate hikes could nudge the economy into a recession.

The probability of a recession over the next 12 months has now climbed to 30 percent, according to a Bloomberg monthly survey of economists.

That’s the highest since 2020 and double the odds that economists predicted three months ago, the survey shows.