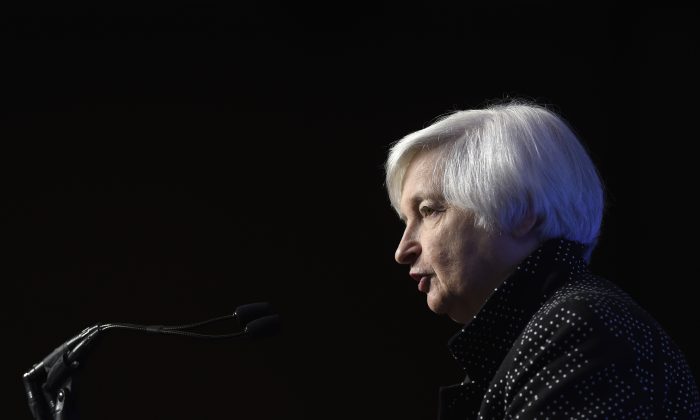 Federal Reserve Chair Janet Yellen speaks at the Economics Club of Washington in Washington, D.C., on Dec. 2, 2015. The Federal Reserve is widely expected to keep interest rates unchanged when it ends a policy meeting on Jan. 27, 2016. At its last meeting in December, it raised interest rates from record lows. Since then, the global picture has darkened and stock markets have plunged. (AP Photo/Susan Walsh)
Business & Economy

WASHINGTON—The Federal Reserve sounded a note of concern Wednesday about how global pressures could affect a slowing U.S. economy, while keeping a key interest rate unchanged.

Six weeks after it raised rates from record lows, the Fed took stock of a more perilous international picture that could alter its plans for further raising rates. Fed officials issued a statement after their latest policy meeting that suggested they might reduce the pace of future rate hikes if market losses and global weakness persist.

But stock investors were disappointed that the Fed did not commit outright to delaying its pace of rate increases. The Dow Jones industrial average closed down about 223 points, or 1.4 percent. The Dow had been up slightly before the Fed issued its statement.

Sam Stovall, U.S. equity strategist at S&P Capital IQ, said investors had been hoping for a “clear signal” that the Fed would raise rates more gradually for the rest of 2016 and felt discouraged when they didn’t get it.

Many point to the Fed’s December rate hike as a key factor in the stock market’s tumble in recent weeks. The move amounted to only a small rise in the Fed’s still-extremely low target rate for overnight bank lending. But it signaled that a seven-year period of near-zero rates was ending and that while borrowing costs wouldn’t be rising fast, they would be headed up.

The Fed’s new statement said it’s studying “global economic and financial developments and is assessing their implications for the labor market and inflation.”

“This is intended to lull us into lower expectations as to when the next move is going to come,” said Patrick O’Keefe, director of economic research at the consulting firm CohnReznick.

Since the Fed raised rates Dec. 16, stocks have plunged, oil prices have skidded and China’s leaders have struggled to manage a slowdown in the world’s second-biggest economy. The Fed’s statement Wednesday noted that U.S. economic growth has also slowed.

Some economists say they now expect just two modest Fed rate increases during 2016, rather than the three or four they had foreseen when the year began. But no one is sure.

The Fed’s signal in December that it would raise rates four times this year “has become less plausible as we’ve gotten a little bit into the year,” O’Keefe said. “Reality has refused to cooperate.”

In a key change to the statement, the Fed dropped language it had used in December that it was “reasonably confident” that inflation would reach the Fed’s 2 percent target over the next few years.

By dropping this language, the Fed appeared to signal concern that inflation has fallen further as a result of a further drop in oil prices and a stronger dollar. Chair Janet Yellen and other Fed officials have stressed the importance of higher inflation. A key inflation gauge has run below the 2 percent target for more than three years.

The Fed’s policymakers left their benchmark rate unchanged in a range of 0.25 percent to 0.5 percent. For seven years until December, they had kept that rate at record lows near zero.

“It was very noncommittal,” Asha Bangalore, economist at Northern Trust, said of the Fed’s statement.

Why so Bearish? How Hidden Bias Is Sinking Global Stocks

Still, the changes the Fed made in describing economic conditions signaled that it might be prepared to slow its credit tightening until it sees more evidence that the markets and the economy are stabilizing.

The December statement had said the economy was expanding at a “moderate pace.” The new statement notes that “growth slowed late last year.”

The previous statement also described risks to the outlook as “balanced.” That description was dropped Wednesday. In its place, the Fed inserted its concern about global economic and financial developments.

The Fed’s statement was approved by a vote of 10-0.

In the first three trading weeks of 2016, the Dow shed more than 7 percent of its value China has unnerved investors because of an economic slowdown that Beijing seems incapable of steering properly. That country’s decelerating growth has shrunk global commodity prices and the emerging market countries that have supplied them to China.

The tumbling markets so far haven’t shaken consumer confidence. One measurement of confidence climbed for a second month, the Conference Board said this week. Much of the optimism stems from solid job growth: U.S. employers added an average of 284,000 jobs a month in the final quarter of last year. And the unemployment rate remains a low 5 percent. Home and auto sales have also been solid.

But American manufacturing has remained weak. Export sales have slowed in part because a higher-valued dollar has made goods more expensive overseas. The strong dollar has also made imports cheaper and helped hold down inflation.

The economy’s growth, as measured by the gross domestic product, has lagged, with many analysts suggesting that it slowed to a sluggish annual rate below 1 percent in the October-December quarter. Still, they foresee a rebound to a rate of around 2 percent in the current January-March quarter.