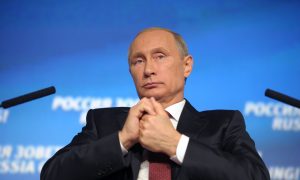 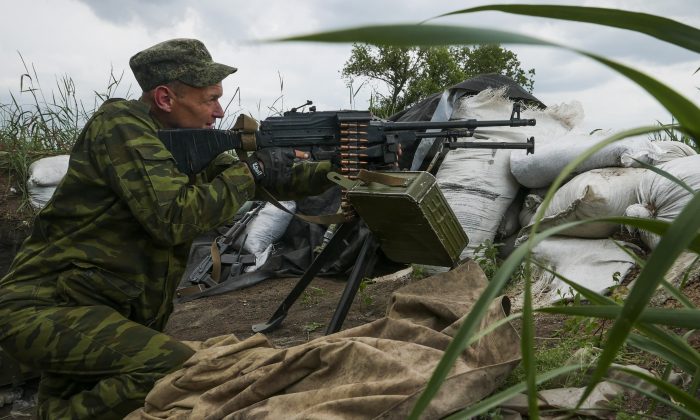 A Russia-backed rebel guards his position near the division line with the Ukrainian army near Dokuchayevsk, eastern Ukraine, on June 5, 2015. (AP Photo/Mstyslav Chernov)
Europe

Fed Up With Failing Peace, Ukraine Rebels Eager to Fight

DOKUCHAYEVSK, Ukraine—In this front-line town in eastern Ukraine, the cease-fire called more than three months ago seems to be only an insulting guise. Shelling rocks the area so often that dogs have learned to head for the basement at the first blast.

Everyone wants the shelling to stop, both the town’s civilians and the rebels who control it. That weariness points paradoxically toward new violence.

The rebels are itching for an end to the pretense and wish their leaders would give the order for a full-out assault.

“We’ve asked them for permission, but all they say is: ‘no, no, no,'” said one rebel sniper, who goes by the call-sign Rzhavy.

The hollowness of the phony armistice was rudely exposed this week as a ferocious one-day battle erupted on the western edge of the main rebel stronghold, Donetsk. International appeals for calm and restraint duly followed.

Instead, the menacing sound of heavy-duty artillery is again being heard along the front.

Under the internationally-brokered peace agreement, all firepower with a caliber over 100mm should have been pulled far back from the front line. But international monitors say the heavy weapons may be getting brought back—recent trips to holding points for the big guns found many that had once been there to be gone.

At the intersection of a country lane leading out of Dokuchayevsk, about 20 kilometers (12 miles) south of Donetsk, separatist militiaman take turns on guard by an anti-tank rocket propped on concrete blocks.

Across the road stands an Orthodox crucifix pocked with bullet holes and the words “save and protect” written on a crossbeam. The roof of a dilapidated warehouse nearby bears signs of a shell strike.

“So they fire at us at the checkpoints. Fine, we’re fighters here,” said a bespectacled rebel militiaman, who adopted the nom de guerre Odessa in honor of his native city. “But there are civilians living near here. They just hurl stuff at them too.”

One shell last week fell onto Yelena Ignatova’s roof, but spared her meticulously tended garden plot of tomatoes, peppers and cabbages. Residents like Ignatova pray desperately for peace, but have little faith that diplomacy is the way to achieve it.

“What did we need the peace agreement for?” she said. “Just to give the Ukrainian army the chance to reinforce here?”

The diplomatic path’s prospects appeared to further dim this month when the latest round of talks between rebels, Russia and Ukraine ended with no visible progress. On Saturday, the talks’ moderator, Swiss diplomat Heidi Tagliavini, resigned.

The units holding the line in Dokuchayevsk are a varied crew. Some are from nearby towns and cities. The voyage there has been longer for others, like Valery, an ethnic Evenk from the Siberian region of Yakutia in Russia, around 5,500 kilometers (3,300 miles) to the east.

Valery, who agreed only to give his first name, said he completed a three-year contract with the Russian army in September and decided to travel to Ukraine after growing bored of civilian life.

“My granny told me that men should fight, so I came here,” he said.

Dokuchayevsk is only one of multiple potential flashpoints. The worst violence to hit east Ukraine in months broke out Wednesday in Marinka, a satellite suburb of apartment buildings outside Donetsk.

Following a well-rehearsed pattern, both sides blamed one another for sparking the fighting. An official account by monitors from the Organization for Security and Cooperation in Europe describes movements of rebel forces in Donetsk on the eve of the battle that suggest the initiative may have been with them.

Ukrainian and separatist officials appear to be dissembling about the scale of their losses.

Kiev says five of its troops were killed, although soldiers told The Associated Press of a battle so ferocious that they feared none of them would survive. One complained that they had little with which to repel that attack—his unit’s anti-tank rocket launcher was damaged and the portable grenade launcher is of little use against armored vehicles.

Rebel leaders are admitting to 16 deaths among combatants, but the rank-and-file privately admit the true number ranges into several dozen.

Separatists quietly buried some of their dead Friday and then more of them over the weekend.

Nobody appears to have lost or gained ground in the fighting, so the only certain dividend has been a further intensification in the anger and frustration felt by the fighters.

In the wake of the events in Marinka, Ukrainian officials had to admit they used heavy weaponry proscribed under the cease-fire agreement in their battle to hold onto the town.

Such arms may give their users power but they have proven disastrously imprecise. The trail of destruction created by the Marinka unrest led deep into Donetsk, where part of a market was burned to the ground after being struck by a projectile.

OSCE accounts also indicate that rebels haven’t refrained from deploying multiple rocket launchers and several other weapons prohibited from being anywhere near the front.

In Dokuchayevsk, rebel fighters say the shelling has worsened in the last two weeks and that the Ukrainian army has taken to using Grad rocket launchers and large-caliber artillery, along with the usual mortars and tanks. Relatively fresh impact craters seen on the grounds of an oil depot in the town Friday were several feet deep—a potential confirmation of that claim.

At his post, Odessa says there is only one conclusion to be drawn.

“As soon as we get the order, we will go ahead. We all want to get this over with as soon as possible,” he said. “What are all these negotiations for?”