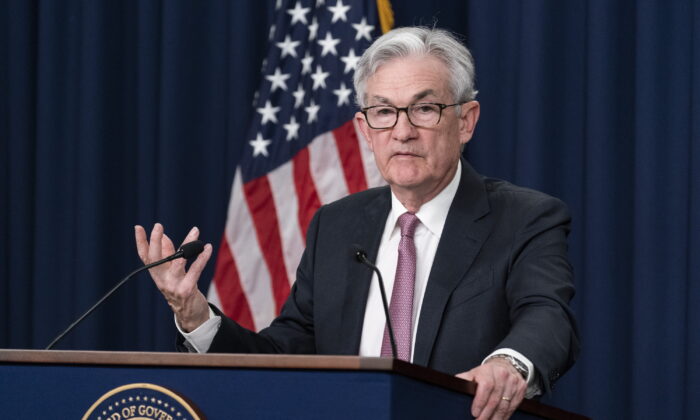 Federal Reserve Board Chair Jerome Powell speaks during a news conference at the Federal Reserve in Washington on May 4, 2022. (Alex Brandon/AP Photo)
Economic Policies

Federal Reserve Chairman Jerome Powell said that the central bank is committed to combating elevated inflation by raising interest rates until it comes down, according to an interview he gave to The Wall Street Journal’s Future of Everything Festival.

“We will go until we feel like we are at a place where we can say, ‘Yes, financial conditions are at an appropriate place. We see inflation coming down,’” Powell said in the May 17 interview. “We will go to that point, and there will not be any hesitation about that.”

At present, the Fed is maintaining the interest rate between the range of 0.75 and 1 percent. Over the next 12 to 18 months, interest rates could be raised up to 4 percent if inflation does not show any signs of coming down. Two months back, most Fed officials were expecting rates to rise to a maximum of 3 percent.

The Federal Reserve had raised interest rates by 50 basis points in May, with Powell indicating that the bank might resort to similar moves during its June and July meetings.

A year ago, Fed officials had called higher inflation a temporary phenomenon, a view they changed last fall. But even as recently as January, the Fed expressed hope that inflation would ease down by this spring due to improvements in the supply chain crisis.

The U.S. annual inflation rate came in at 8.3 percent in April according to data from the Bureau of Labor Statistics. Though it is slightly lower from the 8.5 percent inflation in March, it still remains near four-decade high levels.

The core inflation rate, which excludes energy and food prices, rose by 6.2 percent. On a month-on-month basis, inflation jumped by 0.3 percent and core inflation by 0.6 percent.

“Restoring price stability is an unconditional need. It is something we have to do,” Powell said. “There could be some pain involved.”

Fed’s decision to bring down inflation might also push up the unemployment rate, which was close to the lowest level in five decades at 3.6 percent in April. “It may not be a perfect labor market,” the Fed official added.

Powell also admitted that the bank faces a difficult task of slowing down economic growth in order to lower inflation but without triggering a recession. To achieve this would be a challenge since inflation is high and unemployment is already very low, he stated.