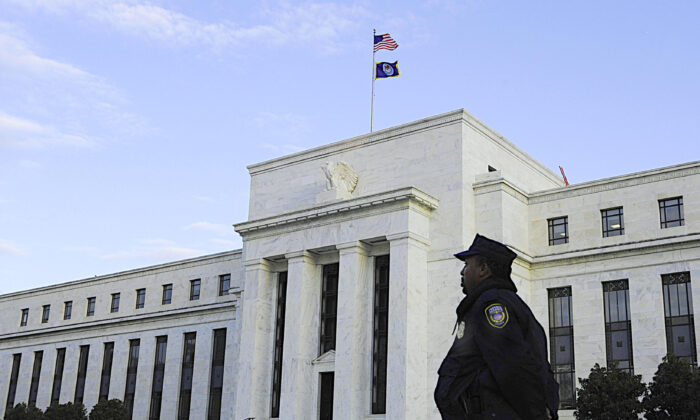 A Fed estimate shows the U.S. unemployment rate in the second quarter will likely hover around 32 percent, while in a worst-case scenario, it could spike to over 40 percent.

St. Louis Fed President Jim Bullard was interviewed by Bloomberg TV on Monday, when he referred viewers to a Fed note with jobless projections based on occupations “exposed to layoff risk due to social distancing” amid the COVID-19 outbreak.

“If you read the blog carefully, you’ll see that there is a way to bound the unemployment rate—it’s going to be somewhere between 10 percent and, I think the upper bound is around 42 percent,” he said.

The Fed’s “back-of-the-envelope” calculations used two different models to give optimistic and pessimistic estimates, and show a second-quarter jobless rate ranging between 10.5 percent and 40.6 percent, with 27.3 million jobs lost at the lower bound and 66.8 million in the upper.

Fed analysts averaged the two for a most likely outcome, which saw 47.05 million people losing their jobs in the second quarter.

Bullard said there is considerable uncertainty around the estimates, which are strongly impacted by factors like whether businesses keep workers on their payrolls by taking advantage of federal pandemic relief programs.

He told Bloomberg that companies applying for forgivable Small Business Administration loans could see benefits to themselves and keep joblessness down.

“You might be able to retain all of your workers and then when the startup occurs later, you will be able to have the same workers and you do not have to hire all over again,” Bullard said.

An example is Bank of America, whose CEO Brian Moynihan recently said its 208,000 employees don’t need to worry about their jobs for 2020.

“We don’t want our teammates to worry about their jobs during a time like this,” Moynihan told CNBC’s Jim Cramer on Friday. “We told them all; there’s no issue, you’re all going to be working now through year-end. No layoffs, no nothing.

“We’ll continue to pay everybody, even those who can’t work from home because the type of work they do isn’t doable from home,” he said.

The Fed’s estimates include other caveats like whether recently unemployed workers are discouraged and not looking for jobs, and thus would not count as unemployed.

The projections also “do not account for any potential effects of fiscal measures, such as payroll support measures for small businesses or changes in the generosity of unemployment insurance that may be implemented between now and the end of June.”

“Hopefully, if this all works smoothly, and there’s a lot in the legislation as well,” Bullard said, “we’ll be able to come out the other side and get the economy rocking again.”

The Fed’s projections are a downward revision of Bullard’s earlier estimate of a 30 percent jobless rate.

His hopes for a sharp rebound follow remarks made by Fed Chair Jerome Powell, who said the central bank would act to give the economy its best chance at a quick recovery.

“This is a situation where people are being asked to step back from economic activity, close their businesses, stay home from work,” Powell told NBC’s “Today” on March 26.

“So, in principle, if we get the virus spread under control fairly quickly, then economic activity can resume and we want to make that rebound as vigorous as possible,” Powell said, adding that the Fed would “aggressively” use its emergency lending authority to supply credit to businesses of all sizes.