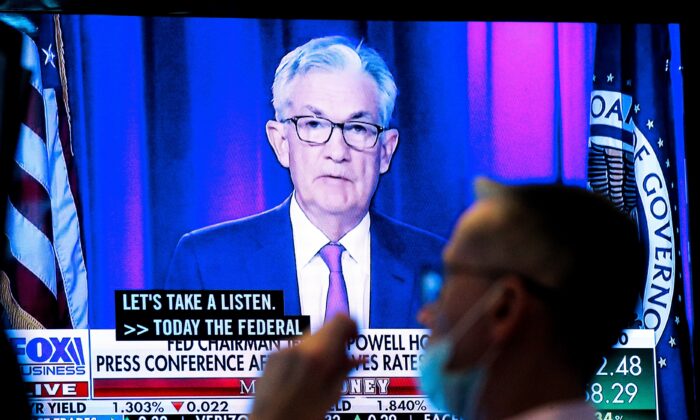 For the first time since 2018, the Federal Reserve raised its benchmark interest rate by 25 basis points, increasing the target range for the rate to 0.25–0.5 percent.

That’s a significant shift in policy outlook since December, when Fed officials were projecting only three quarter-point increases this year and three more in 2023.

The Fed’s inflation projections also increased materially for this year. Officials anticipate that the personal consumption expenditure (PCE) price index, which is the central bank’s favorite inflation gauge, will hit 4.3 percent in 2022, compared to the 2.6 percent forecast in December.

Fed officials also lowered their growth projection for 2022 to 2.8 percent from 4.0 percent. The unemployment rate is predicted to fall to 3.5 percent by the end of 2022.

The central bank also warned that Russia’s invasion of Ukraine will apply upward pressure on inflation and weigh on gross domestic product (GDP).

“Indicators of economic activity and employment have continued to strengthen. Job gains have been strong in recent months, and the unemployment rate has declined substantially. Inflation remains elevated, reflecting supply and demand imbalances related to the pandemic, higher energy prices, and broader price pressures,” the FOMC said in a statement.

“The invasion of Ukraine by Russia is causing tremendous human and economic hardship. The implications for the U.S. economy are highly uncertain, but in the near term the invasion and related events are likely to create additional upward pressure on inflation and weigh on economic activity.”

Although the central bank refrained from cutting its $9 trillion balance sheet, the Fed confirmed that it will trim its holdings “at a coming meeting.” For now, the next policy actions, the Fed noted that it will monitor economic and geopolitical situations in the United States and across the globe.

“We expect inflation to return to 2 percent while the labor market remains strong,” Fed Chairman Jerome Powell said at a post-meeting press conference.

“That said, inflation is likely to take longer to return to our price stability goal than previously expected.”

Stocks rallied in a volatile session after the Fed’s announcement. The Dow Jones Industrial Average rose 518.76 points, or 1.55 percent. The S&P 500 gained 2.24 percent, while the Nasdaq Composite added 3.77 percent.

“Perhaps the surprise was that the Fed’s anticipating raising rates another six times this year,” Robert Johnson, chairman and CEO of Economic Index Associates, told The Epoch Times. “The caveat is that a prolonged conflict in the Ukraine and a resulting slowing economy could serve to slow down the pace of these rate changes.”

According to Powell, U.S. labor market and the economy are “very strong and well positioned” to handle higher interest rates.

Hence, he said, “the probability of a recession within the next year is not particularly elevated.”

‘Hopelessly’ Behind the Curve

Many analysts believe the Fed is behind the curve in tackling inflation, and some wonder whether the Fed chief will take aggressive steps to get prices back under control, as did former Fed Chair Paul Volcker in the 1980s.

When Volcker took the helm of the Fed in August 1979, U.S. inflation was already running high because of two oil shocks triggered by the Arab–Israeli War of 1973 and the Iranian Revolution of 1979. In March 1980, the inflation rate peaked at a record high of 14.8 percent.

As the Fed chair under Presidents Jimmy Carter and Ronald Reagan, Volcker took bold steps to contain the runaway inflation by targeting the money supply. The Fed’s benchmark interest rate rose from 11 percent to a record 20 percent by late 1980. When Volcker left the central bank in 1987, he had gotten inflation back down to 4.3 percent. Volcker’s tightening of monetary policy led to two recessions before prices finally stabilized.

Market strategist Ed Yardeni of Yardeni Research doubts that Powell will do what it takes to bring inflation down as Volcker did.

“The Fed is hopelessly behind the inflation curve,” he wrote in a recent note to clients. “The CPI inflation rate was 7.9% y/y during February. The last time it was this high was during January 1982. Back then, the federal funds rate was 13.2%; today it is near zero, where it has been since March 2020. The spread between the federal funds rate and the CPI inflation rate was -7.8% during February, the most negative it has been on record.”

Many analysts think the Powell-led Fed won’t move fast enough to get prices back under control.

“We will take the necessary steps to ensure that high inflation does not become entrenched, while also supporting a strong labor market,” Powell said in response to those concerns. “If we conclude that it would be appropriate to move more quickly, we’ll do so.”

Some members of the U.S. central bank also believe greater aggression is necessary to ensure inflation does not spiral out of control.

James Bullard, the St. Louis Fed Bank president, has repeated calls for an increase of a full percentage point by July, arguing that there is too much “mindshare” that inflation will dissipate.

“Overall, I would say there’s been too much emphasis and too much mindshare devoted to the idea that inflation will dissipate at some point in the future,” Bullard said during a town hall at Columbia University.

Fed Governor Christopher Waller also presented the case for raising rates by an entire percentage point by the middle of 2022, while also trimming the institution’s $9 trillion balance sheet “no later than” its July policy meeting.

“I believe appropriate interest rate policy brings the target range up to 1 to 1.25 percent early in the summer,” he stated, adding that the situation in Ukraine might require “a more modest” approach to tightening.

This year, the market has been penciling between five and seven rate increases to help curb 40-year high inflation. However, traders have also been increasing their bets that Fed policymakers will cut rates toward the end of 2023 in response to slowing economic growth.

Forecasters have revised their expectations for a recession and higher inflation upward, a CNBC Fed Survey revealed on March 15.

The probability of an economic downturn in the next 12 months swelled to 33 percent, up 10 percentage points from last month’s survey. The U.S. annual inflation rate is expected to finish the year at 5.2 percent, nearly a full percentage point higher than the February survey.

“We might be on the cusp of the Fed raising rates at the same time there is a minus sign in front of GDP,” Peter Boockvar, chief investment officer of Bleakley Advisory Group, wrote in the monthly poll. “What an awful position to be in, but until inflation falls sharply, they have no choice but to carry on.”

Last week, Goldman Sachs sparked widespread concerns after the bank cut its U.S. GDP forecast and raised its odds of a recession to 35 percent.

But with excess liquidity in the financial system, the equities might not endure too much of a scare, says Bryce Doty, senior Portfolio Manager at Sit Investment Associates.

In the coming months, the Fed is likely to convey to the financial markets that its actions will be dependent on data and that broader uncertainty could affect its policy decisions, notes Nick Reece, a portfolio manager at Merk Investments.