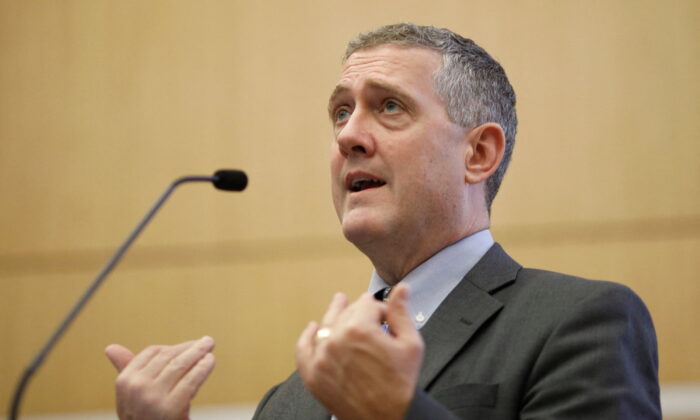 The latest odds of a 100-basis-point increase sit at 31 percent, according to the CME FedWatch Tool; however, U.S. central bank officials aren’t ready to commit to a full percentage point increase later this month, which would be the largest in the Fed’s modern era.

Speaking in an interview with Bloomberg Radio, Fed Cleveland Bank President Loretta Mester wasn’t adamant about accelerating the institution’s rate increases to combat soaring price inflation, although she said the consumer price index (CPI) headline number “was uniformly bad, there was no good news in that report.”

She noted that there’s a lot more data coming out ahead of the July 26–27 FOMC meeting that she’ll “be very attuned to” before considering an ultra-hawkish position.

Fed Governor Christopher Waller shared his colleague’s position, telling an event in Idaho that he’ll be monitoring the data before advocating for a 100-basis-point increase. For now, he’s in favor of a second consecutive three-quarter-point hike.

“However, my base case for July depends on incoming data,” he said. “We have important data releases on retail sales and housing coming in before the July meeting. If that data comes in materially stronger than expected, it would make me lean toward a larger hike at the July meeting to the extent it shows demand is not slowing down fast enough to get inflation down.”

While he doesn’t think inflation has peaked, St. Louis Fed Bank President James Bullard told Nikkei that he believes it will slow down in 2023. As a result, he doesn’t champion raising rates by 100 basis points, although Bullard said the central bank needs to act quickly.

“I think we’ve mapped out a strategy that will contain inflation and move us back toward 2 percent, but we do have to move quickly, and we are moving quickly, faster than our tightening cycle in 1994, which I think is appropriate, because we have a lot more inflation than we had in 1994,” he told Nikkei. “I think that this shows that the Fed’s got the right strategy here for the funds rate.”

Bullard said the benchmark federal funds rate could top 4 percent by the end of 2022, while noting that the 3.5 percent target “is already pretty aggressive.”

“If data came in, continued to come in, in an adverse way, for the committee, then we could consider doing more, as we go through the fall here. So, I’d say it’s a possibility,” he said.

Will Recent Data Feed or Tame the Hawks?

Most of the economic numbers that were published on July 15 topped market estimates.

June retail sales rose by 1 percent, higher than the median forecast of 0.8 percent, according to the Census Bureau (pdf).

The New York Empire State Manufacturing Index clocked in at a surprise 11.1 this month. The market had anticipated another negative reading.

However, industrial and manufacturing production tumbled to minus 0.2 and 0.5 percent, respectively. Capacity utilization dropped to 80 percent. The University of Michigan’s Consumer Sentiment Index increased to 51.1, and near-term inflation expectations eased to 5.2 percent.

Housing data, regional manufacturing surveys, and purchasing managers’ index readings will be released ahead of the Fed’s much-anticipated meeting.

“The Fed will be paying particularly close attention to these kinds of data points as they could provide insight into inflation expectations becoming ingrained or ideally not, which could allow for a smoother return to target over the medium term,” Craig Erlam, a senior market analyst at OANDA, wrote in a research note.

Robert R. Johnson, CEO of Economic Index Associates and professor at Creighton University’s Heider College of Business, recently told The Epoch Times that he would be surprised if the Fed reacted to the CPI data with a 100-basis-point move.

“My skepticism is driven by my belief that with gas prices dropping fairly substantially, the next inflation report will be a little cooler than today’s report,” he said.

Until then, investors will also monitor other central banks’ actions.

The Bank of Canada took everyone by surprise last week by pulling the trigger on a 100-basis-point increase. The market had expected the Canadian central bank to move ahead with a 75-basis-point boost.

Is a recession still on the table? Mester said economic downturn risks have certainly risen, but the primary objective for the Fed is to restore price stability.

Despite the robust data on July 15, the Fed Bank of Atlanta’s GDPNow estimate for the second quarter weakened to minus 1.5 percent. If accurate, the U.S. economy could be in the middle of a recession as the gross domestic product growth rate came in at minus 1.6 percent in the first quarter.

In a note to clients, George Saravelos, global head of currency research at Deutsche Bank, wrote that the markets are now pricing in a 100 percent risk of a recession before the end of the year.

The latest Bloomberg monthly survey of economists enhanced the probability of a recession over the next 12 months to 47.5 percent, up from 30 percent in June.