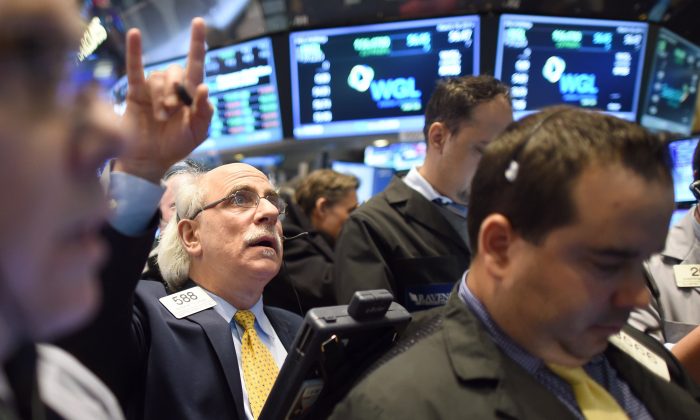 Traders on the floor of the New York Stock Exchange at the closing bell on March 18, 2015. Wall Street stocks surged Wednesday after the Federal Reserve trimmed its US economic forecast and signaled a cautious approach to raising interest rates. The Dow Jones Industrial Average advanced 227.11 points (1.27 percent) to 18,076.19. AFP PHOTO / TIMOTHY A. CLARY (Photo credit should read TIMOTHY A. CLARY/AFP/Getty Images)
News

Is it good for stocks when the economy slows down? Apparently so, as long as the Fed doesn’t raise rates.

“It will require a continued improvement of the U.S. economy for the Fed to start raising the Fed funds target rate,” said Akram Tanweer, senior economist at Voya Investment Management.

So despite this fact, the Fed removed the infamous “patient stance” from its statement released on March 18, its indication that economic growth was slowing was taken as a sign by the market that rates will stay lower for longer.

Stocks went up (S&P 500 +1.22 percent), bonds went up (10-year Treasury +1.26 percent), gold went up (+1.6 percent). Only the dollar, calculated as an index of trade weighted currencies went down (-1.8 percent), as markets believe the Fed will start easing and diluting the monetary base instead of raising rates.

So it mattered little that the Fed revised down its growth forecast for 2015 from 3 percent to 2.7 percent.

Stocks seem to have decoupled from a recent downtrend in macroeconomic indicators as well as lowered earnings forecasts.

It is true that stocks correlate little with actual GDP figures and even GDP forecasts, but depend heavily on the interest rate used in discounting future earning streams. If it stays low, equity values will be higher and the other way around.

However, an interest rate set by the Fed and not by the market ultimately is only a financial gimmick and doesn’t have anything to do with real profits needed to sustain higher stock prices. These factors don’t seem to be materializing, despite record Fed stimulus.

Instead, low interest rates have encouraged speculation here and abroad and the Fed is rightly worried about financial bubbles.

The Fed is scared of popping bubbles and the time never seems right to pop them. However, given the stream of bad economic news, the Fed probably waited too long and now doesn’t have much room to move in either direction. Hence the confusing statement.