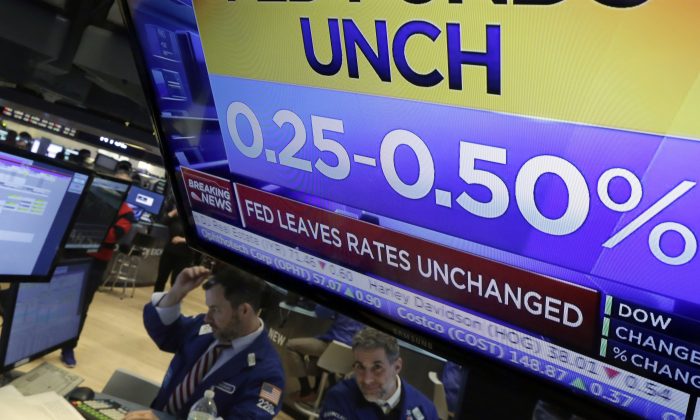 A television screen on the floor of the New York Stock Exchange shows the rate decision of the Federal Reserve, on Jan. 27, 2016. (AP Photo/Richard Drew)
Business & Economy

The Fed said that the case for a rate hike has “continued to strengthen” but that it had decided to wait for more evidence of progress toward its objectives. Most analysts and investors expect a rate hike at the Fed’s next meeting in mid-December.

The statement the Fed issued closely tracked its statement after its previous meeting in September, noting that the job market has continued to strengthen and that economic activity has picked up. The Fed had been widely expected to leave rates alone Wednesday, in part to avoid any perception of affecting next week’s vote.

In its latest statement, the Fed added the word “some” to its observation that it’s prepared wait for “some further evidence” of progress toward its objectives. In the past, the use of “some” has sometimes been a signal that the Fed sees the hurdle for a rate hike as having moved lower.

“The bar for action has been moderately reduced with the insertion of the word ‘some,” ‘ said Carl Tannenbaum, chief economist at Northern Trust and a former Fed official.

In addition, the Fed’s statement said the case for raising rates had “continued to strengthen,” whereas in September, it had said only that the case “has strengthened.”

Tannenbaum said the statement brings the Fed “one stop closer” to a rate hike.

“The timing was poor for an actual move this time because we have a little election coming up next Tuesday,” Tannenbaum said.

He noted that Chair Janet Yellen is scheduled to hold a news conference after the Fed’s next meeting Dec. 13-14. That will provide a platform for her to explain any action the Fed takes then and perhap4s provide guidance on how many further rate increases are probable in 2017.

“When the tightening comes, likely in December, Janet Yellen will want to pair the increase with some context suggesting that rates may not increase again very soon” — a message that might calm financial markets, he said.

Ian Shepherdson, chief economist at Pantheon Macroeconomics, said in a research note Wednesday that “only a shock—the election of Trump, or an external geopolitical or market event—can now prevent a December hike.”

Analysts noted that whether the Fed raised rates this week or not until mid-December would make little economic difference. With inflation still running below the Fed’s 2 percent target, some Fed officials have said they think they have room to continue pursuing an extremely gradual approach to rate increases

Wednesday’s decision was approved on an 8-2 vote, with two regional bank presidents—Esther George of Kansas City and Loretta Mester of Cleveland—casting the dissenting votes. Both wanted to raise rates now. The two had also dissented at the September meeting, along with Eric Rosengren of the Boston regional Fed.

As it did after its September meeting, the Fed said the near-term risks to the economy appear “roughly balanced.” Some analysts had thought this phrase might have been revised to send a stronger signal of a possible December rate increase.

The Fed said nothing explicit in Wednesday’s statement about considering a rate increase at its “next meeting”—words it had used last year in a statement it issued before it raised rates in December.

A rate hike next month would mark a resumption of the increases the Fed began in December, after having left its benchmark rate at a record low near zero for seven years.

The Fed’s years of ultra-low short-term rates were credited by many analysts with rejuvenating the economy after the Great Recession. When the Fed finally raised rates modestly in December last year, most economists and the central bank itself foresaw multiple rate increases in 2016. But economic weakness and market turmoil in China and Europe and a slowdown in U.S. growth kept the Fed on the sidelines.

In the meantime, from job growth to home purchases, the U.S. economy has been demonstrating its resilience seven-plus years after it began recovering from the Great Recession. The economy grew at a respectable 2.9 percent annual pace in the July-September quarter, the government estimated last week.

The unemployment rate is 5 percent, typical of a healthy economy, down from 10 percent in 2009. The housing market, whose meltdown triggered the 2008 financial crisis and the recession, has largely recovered.