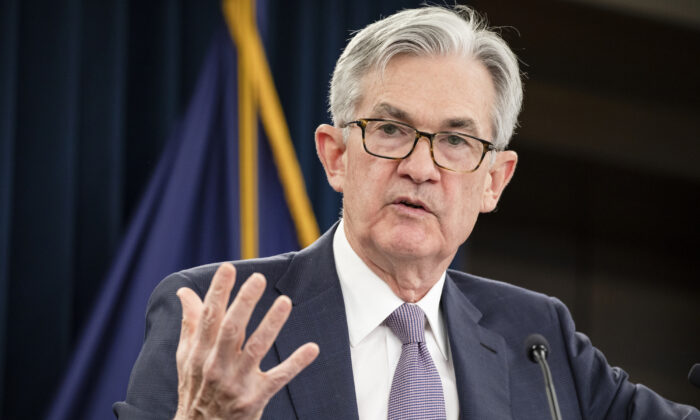 WASHINGTON—Federal Reserve Chairman Jerome Powell said April 9 that the economic recovery in the United States could be fairly quick and robust once the CCP virus runs its course.

“There is every reason to believe that the economic rebound, when it comes, can be robust,” Powell said in a video conference hosted by the Brookings Institution. “We entered this turbulent period on a strong economic footing, and that should help support the recovery.”

The second quarter, which ends June 30, will be a very weak period, with very low economic output and sharp increases in unemployment, he says.

“When the virus does run its course and it’s safe to go back to work and safe for businesses to open, then we would expect there to be a fairly quick rebound,” he said. “I think most people expect that to happen in the second half of this year.”

Powell stressed that all these assumptions depend on “people staying home, staying healthy, doing everything we can to get the virus under control.”

“The more we do that, the sooner it will be safer to go back to work.”

His remarks came soon after the central bank announced additional actions to provide $2.3 trillion in loans to support households, businesses, and state and local governments. The new aid includes $600 billion for small and mid-sized businesses through loan purchases and $500 billion in lending to states and municipalities.

“We are deploying these lending powers to an unprecedented extent,” Powell said. “We will continue to use these powers forcefully, proactively, and aggressively until we are confident that we are solidly on the road to recovery.”

He stressed that the Fed can only use its lending powers, not spending powers. Hence, direct fiscal support rather than a loan is needed for certain companies, he said.

Treasury Secretary Steven Mnuchin told CNBC on April 9 that funding would be rolled out within a few days, with a focus on the airline industry.

He also said that it was possible to open up the economy next month, if “the president feels comfortable with the medical issues.”

The administration is doing “everything necessary that American companies and American workers can be open for business and that they have the liquidity that they need to operate their business in the interim,” Mnuchin said.

President Donald Trump had said last month that he would like to reopen the country for business by Easter. However, he extended the social distancing guidelines to contain the spread of COVID-19 until April 30.

During a White House press briefing on April 8, Trump said that Easter was an aspirational date.

“I was criticized for that, so I don’t like giving dates,” he said. “And that wasn’t a date, that was just an aspiration.”

The president is stepping up efforts to reopen the economy and is already planning to create an economic response task force, according to media reports.

The White House declined to comment on the economic task force, but stated that the president will continue to rely on scientific data.

“President Trump’s policies took this economy to record-setting historic highs for all Americans but this unforeseen, unprecedented crisis has hurt many workers and businesses,” White House spokesman Judd Deere wrote in an email.

“The President wants to see this economy open again so people can get back to work, but scientific data will drive the timeline on those decisions because his number one priority is to protect the safety and well-being of the American people.”

Economists predict that the lockdowns and social distancing in the United States will result in sharply lower new infections over the next 30 days, setting the stage for a gradual economic recovery starting in May and June.

Goldman Sachs stated in a recent report that it expects a “deeper trough,” followed by a “bigger rebound” in the second half of the year.

Initial jobless claims filed in the United States eased to 6.61 million for the week ending April 4 from a record-high of 6.87 million for the previous week. This brought the total number of filings because of the outbreak to about 16.8 million.

“The swell in filings suggests the unemployment rate will easily exceed the Great Recession peak of 10 percent when the April employment report is released in early May,” BNP Paribas stated in a report.