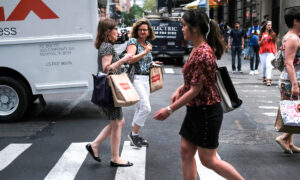 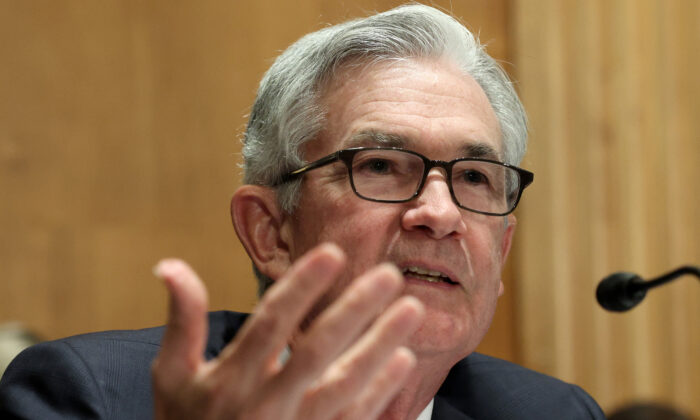 Federal Reserve Chair Jerome Powell addressed inflationary concerns in a speech Friday, acknowledging a sharp rise in prices but arguing, as he has before, that these are temporary, while pointing to signs of inflation easing.

His remarks came as the Commerce Department said in a release Friday that a key inflation gauge, the so-called core PCE price index, rose 3.6 percent in July since last year, hitting a level not seen since 1991. At the same time, on a monthly basis, the core PCE gauge rose 0.3 percent between June and July, after rising 0.5 percent the prior month, suggesting inflationary pressures may be moderating.

Powell acknowledged Friday’s core PCE number in a speech at an economic symposium in Jackson Hole, Wyoming, noting it’s “well above our 2 percent longer-run objective,” adding that both businesses and consumers “widely report upward pressure on prices and wages.”

“Inflation at these levels is, of course, a cause for concern. But that concern is tempered by a number of factors that suggest that these elevated readings are likely to prove temporary,” he said, arguing that the current spike in inflation is largely driven by a relatively narrow group of goods and services that have been directly impacted by the pandemic and the reopening of the economy.

The Fed chair said the “sharp run-up in inflation” was driven by factors including the rapid reopening of the economy, strong policy support, and supply constraints.

“Booming demand for goods and the strength and speed of the reopening have led to shortages and bottlenecks, leaving the COVID-constrained supply side unable to keep up,” Powell said. “The result has been elevated inflation in durable goods—a sector that has experienced an annual inflation rate well below zero over the past quarter century.”

Powell said officials were keeping a close eye on prices of particular goods and services most impacted by the pandemic and reopening, noting that they “are beginning to see a moderation in some cases as shortages ease” and that “some price indicators are beginning to fall.” This includes used car prices, which appear to have stabilized after surging in recent months.

“This same dynamic of upward inflation pressure dissipating and, in some cases, reversing seems likely to play out in durables more generally,” he predicted, adding that, as supply dislocations have started to get ironed out, “inflation in durable goods other than autos has now slowed and may be starting to fall.”

Powell added that officials have not, so far, noted broad-based inflationary pressures but acknowledged that evidence of such pressures spreading more broadly through the economy would be concerning and would prompt a swift policy response.

“We consult a range of measures meant to capture whether price increases for particular items are spilling over into broad-based inflation. These include trimmed mean measures and measures excluding durables and computed from just before the pandemic. These measures generally show inflation at or close to our 2 percent longer-run objective,” he said.

Powell also made a case for the persistence in disinflationary forces like technology and globalization, arguing that there is little evidence these have suddenly reversed or abated, saying that “it seems more likely that they will continue to weigh on inflation as the pandemic passes into history.”

He said the baseline economic outlook is for the economy to continue progressing toward maximum employment, with inflation returning closer to the Fed’s goal of averaging 2 percent over time.

Economist Peter Schiff reacted skeptically to Powell’s predictions of transitory inflation, commenting in a tweet: “The entire sell-off in #gold stocks over the past month was based entirely on the anticipation of Jerome Powell delivering a ‘hawkish’ speech at Jackson Hole. Today’s speech could not have been more dovish. High #inflation is not only permanent, but it’s about to get much higher!”

Meanwhile, a recent survey by Bankrate found that, among the nearly 9 in 10 U.S. adults who said they have experienced price increases since the start of the year, 66 percent said these inflationary pressures have had a negative impact on their financial situations.

Older Americans, especially those on a fixed income, reported being hardest hit by inflation, with 75 percent of Baby Boomers and 70 percent of Gen Xers who noticed higher prices reporting a negative impact on their finances.

“While older adults may be paying better attention and are therefore more likely to notice higher prices, there are also tangible reasons why inflation hits them harder,” said Ted Rossman, senior industry analyst at Bankrate, in an emailed statement to The Epoch Times. “Price increases are especially painful for retired boomers who are trying to make their savings last.”

Rossman added that younger, employed adults are in a better position to weather inflationary pressures as their salaries are expected to rise and they can afford to take more risk because their investments have a significantly longer time horizon.