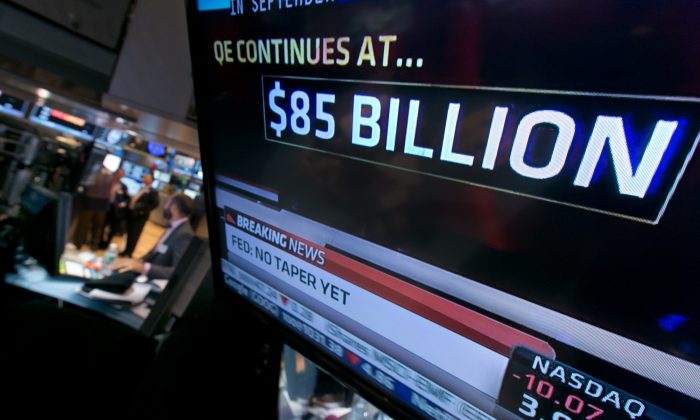 The decision of the Federal Reserve appears on a television screen on the floor of the New York Stock Exchange Wednesday, Oct. 30, 2013. The Fed says in a statement after a two-day policy meeting that it will keep buying $85 billion a month in bonds to keep long-term interest rates low and encourage more borrowing and spending. (AP Photo/Richard Drew)
Business & Economy

Fed Can’t Taper, Now, or in the Future

Language suggests taper still on the table, but chances of action are low
By Valentin Schmid

No taper in October.

That was the result of a two-day meeting by the Federal Reserve, which concluded Wednesday. Fed-language suggests the central bank could scale back its bond purchases, but experts said it cannot do so without crashing the markets.

“[T]he Committee decided to await more evidence that progress will be sustained before adjusting the pace of its purchases,” the Fed stated Oct. 30.

“The Fed essentially confirmed what many had expected, the economy is too weak for them to taper,” said Bill Laggner, principal at Bearing Asset Management.

Indeed, the Fed statement describes a rather lackluster economy. Expansion “at a moderate pace,” “some further improvement” in labor markets, and a “slowed” recovery of the housing sector.

Nonetheless, some observers believe the Fed could reduce the $85 billion monthly purchases of treasury and mortgage-backed bonds this year. The reason they cite is that the Fed removed from its previous statement certain language about tight financial conditions, which could hurt the economic recovery.

“Everyone has bought into asset inflation, people have bought into leverage. How does this unwind?”

Laggner points to the high level of margin debt—which fuels stock speculation and could reverse at any moment—especially if the Fed pulls back the punch bowl.

“The Fed has been buying $85 billion per month and real interest rates have risen a lot. That sets in motion a credit tightening phenomenon, which hurts the levered players, the speculators,” he adds.

Indeed, since the Fed first started talking about tapering in the summer, rates on Treasury bonds have risen, and have not come down much. “The taper talk was a trial balloon,” and it has shown the Fed how vulnerable markets are, said Laggner.

In his view, a tapering scenario could limit further Fed policy action.

Dan Oliver, principal at Myrmican Capital agrees. “The Fed realized in September that it cannot let the 10-year Treasury rate go above 3 percent without tanking the economy.  For now, printing $85 billion per month is sufficient …  Within a few months, the Fed will need to expand QE to keep rates below 3 percent, and Janet Yellen is just the woman to do it.”

On the other hand, more easy money will create more bubbles.

“The two biggest asset managers in the world, Larry Fink at BlackRock, and Bill Gross at PIMCO, came out and talked about bubbles. Both said there are bubbles everywhere,” said Laggner, who thinks the Fed wants to re-inflate the housing market in order to make Americans feel wealthier.

“What the Fed is trying to do is to re-engineer another housing bubble. Once you get the house price up, the wealth effect is much greater with real estate than stocks.”

While quantitative easing had a positive effect on real estate, speculation has been more rampant in other areas, according to Laggner: “What is the last bastion of speculation? The money is flowing in social networking stocks, biotechnology—and now you are seeing some of these names crack.”