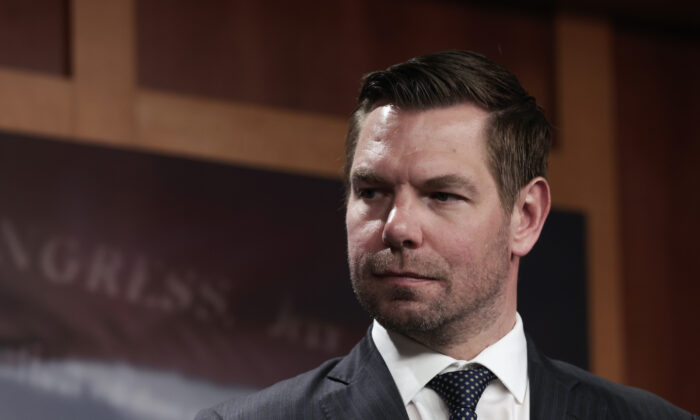 Rep. Eric Swalwell (D-Calif.) listens as Sen. Jack Reed (D-R.I.) speaks during a news conference on the introduction of their Protection from Abusive Passengers Act at the U.S. Capitol Building in Washington on April 6, 2022. (Anna Moneymaker/Getty Images)
Politics

The Federal Election Commission (FEC) on Tuesday announced that it has denied a request by Rep. Eric Swalwell (D-Ca.) to use campaign funds to pay for childcare expenses when he travels to support other Democratic campaigns and at the request of foreign governments and entities.

In a statement, the FEC said that it approved a tally vote on Monday, upholding a previous ruling that campaign funds may only be used to pay for overnight childcare expenses when he travels for his own campaign and his spouse is not available to care for their young children.

“The Commission did not approve a response by the required four affirmative votes as to whether Congressman Swalwell may use campaign funds to pay childcare expenses incurred when he travels for other campaigns or at the request of foreign governments or other entities,” the FEC said (pdf).

Swalwell for Congress counsel Rebecca J. Olson on May 26 made the request, saying the congressman often travels to help other Democrats get elected and at the invitation of foreign governments and entities.

Olsen noted that Swalwell received “many invitations” from foreign governments and entities due to his “well-known status” as a congressman.

She therefore asked if Swalwell’s campaign could pay for a night nanny to care for their three young children, who are “all still in diapers,” when they travel abroad at the invitation of foreign governments and when campaigning for other Democratic candidates.

Olsen said that Swalwell, as both a congressman and candidate for reelection, was a “prolific fundraiser for other democratic candidates,” which meant that he “often is expected to travel and be away from home.”

The FEC’s advisory opinion did not provide a specific opinion in denying the request pertaining to travel at the request of foreign governments, noting that the rules of the House related to such travel was not within the FEC’s jurisdiction.

The Commission told the Swalwell for Congress counsel that campaign funds can only be used for “authorized expenditures in connection with the campaign for Federal office of the candidate or individual,” “for ordinary and necessary expenses incurred in connection with duties of the individual as a holder of Federal office,” and “for any other lawful purpose” that does not constitute conversion of campaign funds to “personal use.”

The “personal use” of campaign funds is defined as to “fulfill any commitment, obligation, or expense of a person that would exist irrespective of the candidate’s election campaign” or duties as a federal officeholder, the FEC said.

Swalwell’s campaign finances have come under scrutiny, with reports citing FEC filings detailing over $62,000 spent between April 1 and May 18 on “travel expenses” related to flights, Ubers, Lyfts, luxury chauffeured transportation, and hotels in the United States and France, NY Post reported.

He also previously came under scrutiny for his campaign finances during his 2020 presidential bid, spending thousands of dollars on alcohol and limousine services, according to filings.

The Democratic congressman also courted controversy over his past ties to an alleged Chinese Communist Party spy, known as Fang Fang or Christine Fang.

A report by Axios in December 2020 claimed that Fang built up an extensive network of contacts with up-and-coming politicians in the San Francisco Bay Area, including Swalwell. The report said Swalwell cut ties with the alleged spy after investigators gave him a “defensive briefing.”

Republicans sought to remove Swalwell from his position in the House Select Committee on Intelligence in May 2021, but Democrats in the House voted the resolution down.